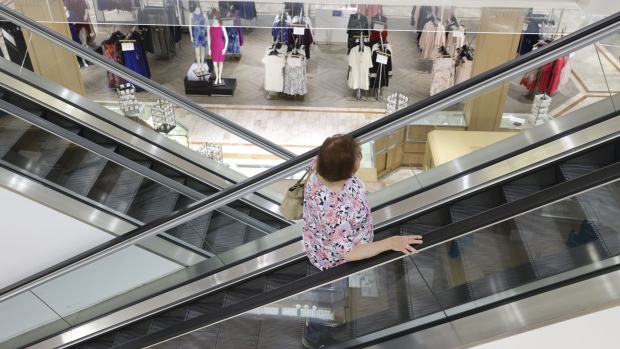 A customer rides an escalator inside a Shopper's Find location, a former Lord & Taylor store that went bankrupt last year, at the Willowbrook Mall in Wayne, New Jersey, U.S., on Monday, July 5, 2021. Shopper’s Find is sourcing directly from manufacturers or wholesalers stuck with piles of last season’s fashion and other extra goods as the retail industry regroups after the pandemic accelerated a monumental shakeout with more than 20 well-known retailers. Photographer: Angus Mordant/Bloomberg , Bloomberg

(Bloomberg) -- Don’t sound the death knell for shopping malls just yet. Yield-starved bond investors are betting some will not only survive -- but thrive.

Los Angeles-based real estate investment firm CIM Group on Friday morning sold $650 million of commercial mortgage-backed securities tied to the refinancing of one of its retail portfolios that includes 111 properties across the country, of which 50 are anchored shopping centers. The securities sold about in line with preliminary guidance.

It’s one of the first geographically diverse, retail- and mall-focused CMBS transactions with a wide variety of tenants and brands to be sold since Covid lockdowns decimated an already beleaguered retail landscape. The transaction was led by JPMorgan Chase & Co. and Deutsche Bank AG.

Investors that spoke to Bloomberg said they may have reservations about the overall sector, but the lure of incremental yield in a tight credit market -- as well as the belief that there will be some winners among top-tier suburban shopping malls -- is drawing them to buy the securities.

“We like the deal, given the price talk,” meaning it will likely offer relatively wider risk premiums compared to other similarly rated credit products, said John Kerschner, head of securitized products at Janus Henderson Investors, speaking before the transaction had been priced.

For example, a BBB rated slice of the CIM Group transaction was sold at 305 basis points over Libor. That compares with BBB corporates that trade at about 106 basis points more than benchmarks on average, according to Bloomberg Barclays index data. And a BBB rated tranche of a CMBS earlier this year for a portfolio of Save Mart Supermarkets stores, which is a similar type of collateral, originally sold at a spread of just 250 basis points.

“For investors comfortable with the property class, the benefit of geographical diversification and adverse rate protection, it could offer some yield pick-up in certain tranches,” said Chris Sullivan, chief investment officer at United Nations Federal Credit Union, speaking before the transaction had been priced.

A lot of money managers are eager to get extra yield now. For example, despite shrinking demand for office space, investors have clamored for CMBS this year tied to the financing of urban office buildings and even hotel chains. Now, they are willing to buy debt linked to some Class A shopping malls, despite the fact that the coronavirus pandemic exacerbated problems for a retail sector that was already challenged by the growth in online shopping and e-commerce.

Securitized bonds such as CMBS often are broadly offering a little more yield than other asset-backed debt and corporate paper, and many are floating-rate, which is attractive if interest rates rise.

One major risk with the deal, however, is that there are 61 properties that only have one tenant. Loans secured by single-tenant properties are at a significantly higher risk of default than those backed by properties with a diversified group of renters, Kroll Bond Ratings said in a research note this month.

However, Janus’ Kerschner said that he likes many of the single-tenant names in the transaction, because “these are all solid companies and fairly defensive versus the Amazonization of the world.”

For instance, many of the tenants in the deal are related to the housing market, which is on fire, he said: Lowe’s, Home Depot, Tractor Supply. Other companies include Petsmart and Michael’s, which had business pick up during Covid, as people bought pets and took up crafting to combat boredom, he said.

There are other potential risk mitigants, Kerschner said.

“The deal is nicely diversified and a good portion of the shopping centers are anchored” by solid tenant names, Kerschner said. The collateral has a relatively low loan-to-value ratio, and the projected pricing “for an investment grade tranche is definitely attractive, given the diversity of the properties,” he said.

“But we are extremely cognizant” of the single-tenant risk, he said.

“There are pockets of opportunity in CMBS but they can be reasonably competitive and fully priced, or they don’t trade at all,” Chris Hentemann, managing partner and chief investment officer of 400 Capital Management, said in an interview. “It’s a challenge to put a scalable amount of distressed capital in CMBS.”