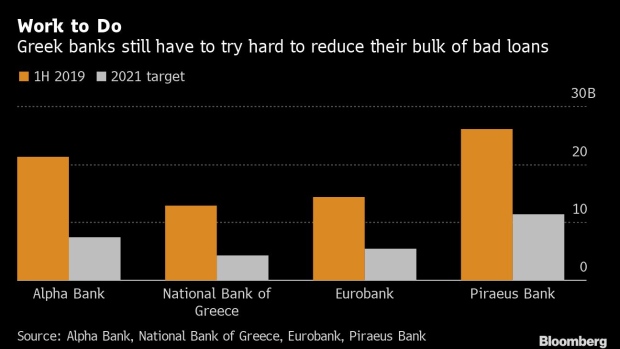 (Bloomberg) -- Major international lenders plan to invest in a Greek government program known as “Hercules” that aims to help domestic banks trim toxic debt, according to a deputy finance minister.

“Investors told us at the International Monetary Fund annual session that they will invest in Hercules,” Deputy Greek Finance Minister George Zavvos said in an interview after the meetings in Washington last week.

Executives from BlackRock Inc., Deutsche Bank AG, Credit Suisse Group AG, JPMorgan Chase & Co. and HSBC Holdings Plc were among those that he had talks with, said Zavvos, who is responsible for financial systems in the government of Prime Minister Kyriakos Mitsotakis.

Greece’s economic recovery is being hindered by non-performing loans held by its banks, a legacy of the debt crisis that forced Athens to seek multiple international bailouts. Lenders including Piraeus Bank SA, Eurobank Ergasias SA, National Bank of Greece SA and Alpha Bank AE are saddled with about 75 billion euros ($83 billion) worth of soured debt and need to cut NPLs by some 50 billion euros by 2021 to meet regulatory targets.

“All Greece’s systemic banks have told the government that they will use Hercules to clean up their balance sheets,” Zavvos said. “Hercules’s most important contribution is that it could secure a zero risk weighted ratio for the bonds that banks will issue.”

Hercules may also help Greece improve its sovereign rating, Zavvos said. Standard & Poor’s is due to update the country’s status on Oct. 25.

The Greek government, which took office in July, managed to get European Commission approval for Hercules within two months. It’s now working with lenders and the Bank of Greece on the details of the legislation, which needs parliamentary approval.

The bill is expected to be voted on by the end of November. “In the coming three to four months, we will focus on making sure that Hercules will work,” Zavvos said, adding that the government plans to make it cheaper for investors to participate.

“Government’s goal is to reduce the 15% tax rate on bonds issuing to give more incentives to investors to use Hercules,” he said. “Greek banks will have to change their business model, since they will have to operate in a more competitive environment. The banking system won’t be the same after Hercules is in place.”

A next step will be the creation of an efficient secondary market for NPLs, with measures such as improving insolvency rules and making sure the servicers’ market works effectively, Zavvos said.

Once Greek banks have soured debt under control, they will have to address the issue of capital quality, as most of their regulatory capital consists of deferred tax claims against the government.

“We will address the quality of banks’ capital in a consistent way,” Zavvos said. “There are solutions by using new hybrid tools that can absorb deferred tax claims.”

“Changes in the capital market will mostly have to do with corporate governance so investors can feel safe that the market works properly and is well regulated,” the minister said. “Supervision will be stricter, as well as penalties.”

Another legacy of the financial crisis is that regulators instructed Greek lenders not to increase their exposure to Greek debt. The government is considering asking them to drop the restriction. “We would like to see this cap being waived,” Zavvos said.

--With assistance from Andrew Blackman.

To contact the reporter on this story: Sotiris Nikas in Athens at snikas@bloomberg.net

To contact the editors responsible for this story: Chad Thomas at cthomas16@bloomberg.net, Iain Rogers, Eleni Chrepa