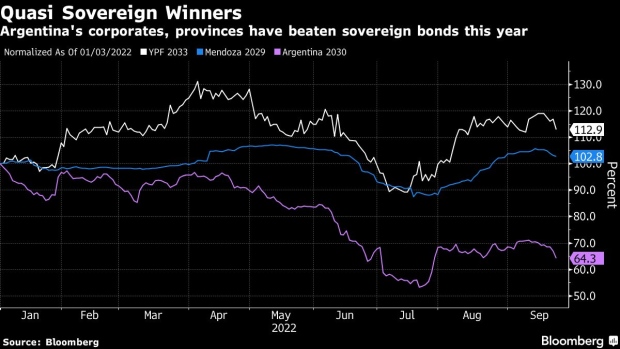 A YPF tanker truck during a protest amid diesel shortages near Puerto General San Martin, Argentina, on Tuesday, April 12, 2022. Just 1,170 trucks were lined up to enter ports on Monday, when the daily average last week was closer to 6,000. , Bloomberg

(Bloomberg) -- Investors are scoring some of the best returns in emerging markets by dumping battered Argentine sovereign bonds to buy the nation’s corporate and provincial notes.

While debt from the federal government has tumbled more than 35% this year to some 20 cents on the dollar, bonds issued by state controlled oil company YPF SA have returned as much as 18%. Notes sold by provinces like Mendoza and Cordoba have returned about 7%.

The returns are among the best in developing nations and stand out all the more when considering that globally, dollar-denominated corporate bonds have lost more than 17% this year. Argentina is also one of the rare places where a corporate bond yields less than a sovereign, with YPF notes due in 2029 paying 18% versus 27% for similar-maturity government notes.

The divergence in Argentina underscores that although investors are pessimistic on the country’s ability to attract investment, damp inflation and revive growth before presidential elections in October 2023, they’re confident its companies and provincial governments can hang on. Bond buyers see many of them as savvy financial managers able to roll with the turmoil, according to Edwin Gutierrez, the head of emerging-market sovereign debt at Abrdn.

“There’s definitely a survivor bias with Argentina corporates,” Gutierrez said from London, where Abrdn has trimmed its holdings of Argentine sovereign bonds while holding onto company securities. “These are the guys who have managed to survive despite anything the government throws at them.”

When the sovereign couldn’t pay its bonds during the pandemic amid dwindling reserves, soaring inflation and a severe lockdown that brought the economy to a halt, many Argentine companies and provinces soon followed the federal government into default. Since then, Argentina’s policy makers haven’t been able to put the economy on a sustainable growth path, leading to bets that another debt crisis is all but inevitable within the next few years.

The smaller Argentine issuers used the relief created by their restructurings to shore up balance sheets. The provinces of Mendoza and Cordoba are seen by investors as fiscally sound. Provinces such as Chubut and Neuquen benefit from the fact that they’re energy producers that get revenue in dollars and are able to shield that income from the government’s foreign-exchange controls.

YPF also used some of the savings from its restructuring to boost capital investments, shoring up its production capacity for years to come.

“Although the credit quality of corporate bonds in some cases is greatly affected by the sovereign, companies have been forced to make twice the effort to rebuild a track record of profitability,” said Maria Moyano Hidalgo, a senior corporate research strategist at Adcap in Buenos Aires. “That has allowed corporates to enjoy wide spreads over sovereign prices.”

Jason Trujillo, a senior portfolio manager at Invesco in Atlanta, added that another positive for the smaller issuers is that their debt tends to be shorter term and not as vulnerable to losses from rising global interest rates.

To be sure, Argentine companies and provinces aren’t immune from the country’s struggles, and their rally may not have much further to go, given that inflation is on track to approach 100% this year and the nation’s currency reserves have dwindled to a six-year low. The government has made it difficult for borrowers to access dollars in the past, and there’s the chance those restrictions could be tightened further.

Economy Minister Sergio Massa has tried to boost reserves by incentivizing agriculture exporters to sell their stocks faster, and by working to get Argentina’s $44 billion lending program with the International Monetary Fund back on track, but it’s unclear how successful those efforts will be.

“We have been involved with YPF but remain cautious on the other corporates, including provinces, given the continued challenging backdrop,” said Siby Thomas, a research analyst at T. Rowe Price in Baltimore. “Argentine names have generally done well, though a large part of that is due to the idiosyncratic nature of the story at a time when rising rates are driving total returns.”

For traders who must invest in Argentina but want to avoid sovereign bonds, notes from YPF and the provinces may be the only place to go.

“It’s hard to talk about ‘winning’ in Argentina,” said Ray Zucaro, chief investment officer at RVX Asset Management in Miami, who owns YPF bonds. “But the nation’s corporate and quasi sovereign bonds are definitely a way to hide.”