Even as the Federal Reserve jacks up interest rates and sends technology stocks tumbling, it only gets harder to stay away from the sector.

On the one hand, there’s so much to like: The Nasdaq 100 Index is now 35 per cent cheaper than at its 2020 peak, megacap companies like Apple Inc. are still filling their coffers with cash and the earnings outlook shows no sign of a significant slowdown.

The index fell 0.8 per cent on Thursday and is down almost 30 per cent so far this year. 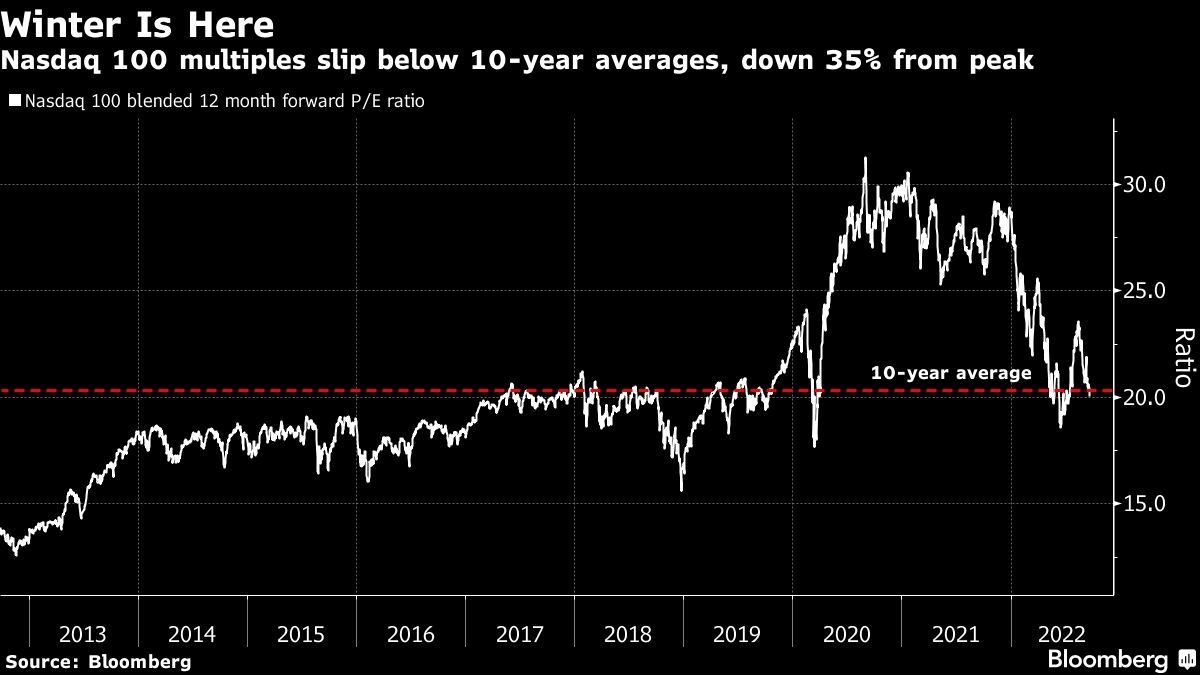 Nasdaq 100 multiples slip below 10-year averages, down 35 per cent from peak
But, the Fed. The market chatter going into Wednesday’s monetary policy meeting was that there was a high likelihood of a relief rally in tech if the central bank, as expected, raised its benchmark rate by 75 basis points. Turns out it wasn’t that straightforward. The Nasdaq 100 slumped to early July lows, pretty much erasing most of the summer rally, after a more hawkish tone than hoped for from the Fed.

So why not avoid tech until the dust settles? That just isn’t an option for most institutional investors, given that the industry is by far the largest in the S&P 500 Index, at almost 27 per cent of the benchmark. If tech stocks turn around and you miss out on the rally, it can be career-ending.

Stockpickers thus are gravitating towards “quality” companies with durable businesses or stock charts. Apple Inc. is down just 13 per cent this year. T-Mobile US Inc., cybersecurity company Palo Alto Networks Inc. and chipmaker Texas Instrument Inc. are a few of the others that also have managed to beat most of their tech peers.

“Look for businesses with high market share, a good moat, and low substitution risk,” said Brian Battle, director of trading at Performance Trust Capital Partners. “Microsoft makes stuff that people pay for. Apple sells billions in consumer goods, and it is hard to replace those.”

Companies that don’t have those attributes are getting slammed in the stock market. Take Meta Platforms Inc., the Facebook owner dependent on ads. It’s lost 58 per cent of its value this year. It’s a similar picture with Snapchat owner Snap Inc. and streaming-video company Netflix Inc.

As long as real yields in the bond market keep going up, tech stocks probably haven’t bottomed, arguing against buying into the Nasdaq 100. While the index’s earnings multiple has come down a lot, it’s falling from very inflated levels. But stockpickers are finding plenty to buy in tech.

“So it has gotten cheaper, but it isn’t cheap,” said Alec Young, chief investment strategist at Mapsignals, a quantitative research firm. “Until it feels like the Fed is able to take a pause on tightening, tech isn’t likely to be a leadership sector.”