Pot stocks have broken their three-week winning streak, a somewhat ironic shift in sentiment given that last week was full of positives on the U.S. cannabis policy front.

In separate addresses, the governors of New York and New Jersey each said they’ll make legalization of recreational cannabis a priority for 2019, potentially opening up a new market with a combined population of close to 30 million. Perhaps more importantly for the future of the industry, U.S. Attorney General nominee William Barr said he’ll respect state marijuana laws even though he personally disapproves of legalization. He also urged Congress to make a country-wide decision on the drug’s legality.

It’s a far cry from his predecessor Jeff Sessions, who once told a Senate hearing that “good people don’t smoke marijuana” then rescinded an Obama-era policy that took a hands-off approach to the drug. At the time, there was genuine concern that the burgeoning U.S. pot industry might be halted in its tracks. The reality, of course, is that expansion continued unabated.

U.S. spending on legal marijuana is expected to reach $22.2 billion in 2022 versus US$5.9 billion in Canada, according to a report released last week by Arcview Market Research and BDS Analytics.

Last week, there was a major milestone for the industry as the de-scheduling of hemp in the U.S. farm bill starts to bear fruit. Canopy Growth Corp. said it will spend up to US$150 million to build its first production facility in the U.S., kicking off what is certain to be a wave of Canadian producers moving into the American hemp market. The real opportunity here is not hemp but its extract cannabidiol, better known as CBD.

CBD is quickly being touted as a potential new wonder drug, with proponents saying it eases everything from anxiety and insomnia to pain and inflammation. Various estimates say the U.S. consumer market alone could be worth tens of billions of dollars. Caution is warranted however, as the Food and Drug Administration has said CBD can’t be added to food or health products without agency approval, meaning it may take longer than expected for CBD foot cream or elbow braces -- two potential products touted by Tilray Inc. in its tie-up with Authentic Brands Group LLC on Tuesday -- to materialize. 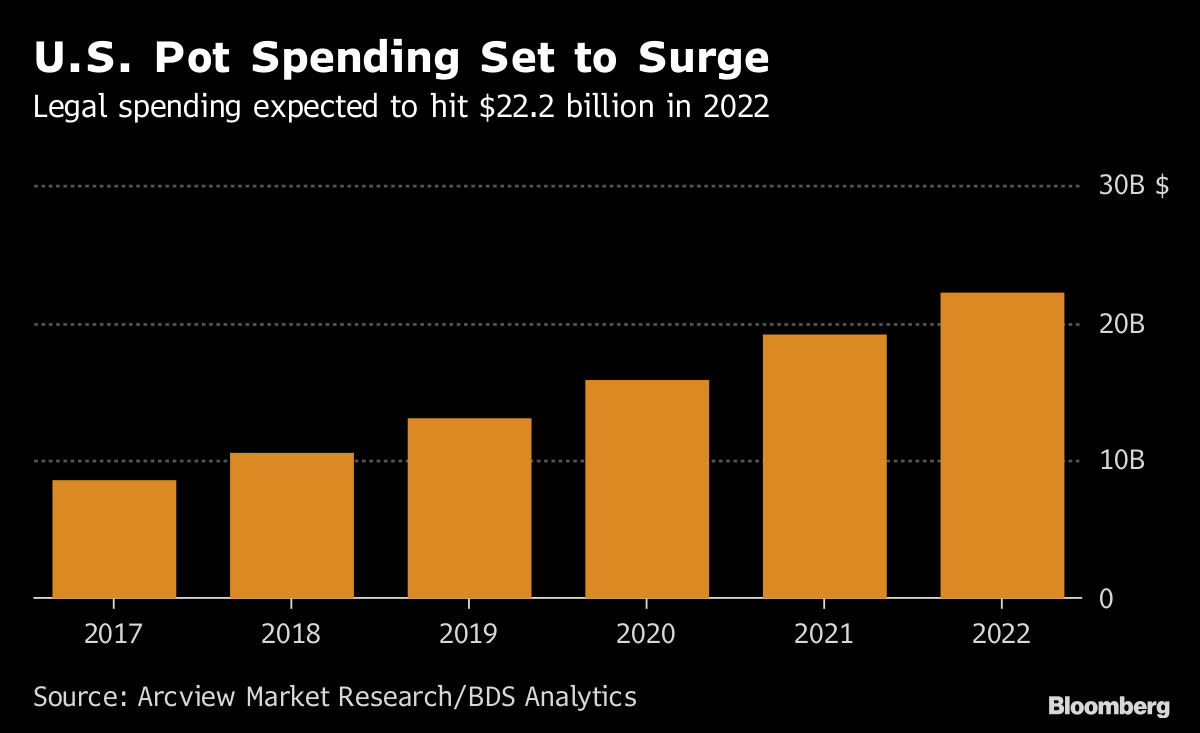 Canadian Imperial Bank of Commerce came out last week with a lengthy initiation note, giving Canopy and Cronos Group Inc. outperformer ratings and Aphria Inc. a neutral rating. It’s a compelling read and a reminder to those who get bogged down in the day-to-day of this industry of the paradigm shift underway.

“Investors rarely get to witness the birth of an industry,” analyst John Zamparo wrote in the note, published Jan. 17. “Such historic events include the gold rush, inventions of the automobile and aircraft, and the internet.”

But Zamparo pointed out that as in the above examples, “very few companies live up to their lofty expectations.” He said only a handful of firms will come to dominate the global market and believes Canopy and Cronos will be two of the winners, largely because of the investments both have received from outside industries (alcohol in Canopy’s case and tobacco for Cronos).

The Canadian government released data on the first full month of legal recreational sales last week, with total sales of dried cannabis up 22 per cent and total sales of cannabis oil up 14 per cent from October. Given that recreational use was only legal for half of October, these numbers felt a little light to some analysts. Indeed the numbers show that total rec sales per day decreased by 42 per cent month-over-month, according to Eight Capital analyst Graeme Kreindler.

Demand is clearly not the problem, as supply shortages persist across the country. Instead, it appears to be due to bottlenecks “at multiple points in the supply chain,” including limited cultivation capacity, licensing delays, a shortage of qualified labor, lack of bricks-and-mortar store locations and limited product choice, Kreindler wrote. He expects the issues will begin to subside in the back half of 2019.