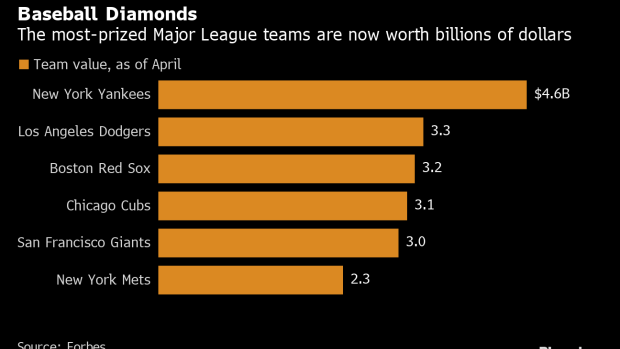 Traditionally, baseball owners have been wealthy individuals, but the new policy could bring in cash from Wall Street firms and college endowments, according to the people familiar with the change, which was made earlier this year.

It’s MLB’s answer to a problem affecting all the major U.S. sports leagues: Teams’ multibillion-dollar valuations have made it difficult for part-owners -- known as limited partners, or LPs -- to find buyers for their stakes when it’s time to sell. MLB teams are worth an average $1.78 billion, up 8% from the previous year, Forbes estimates. And the Yankees, tops in the league, are approaching $5 billion.

One sports banker is already taking advantage of the change. Galatioto Sports Partners has created a $500 million vehicle -- the GSP Baseball Fund -- to invest in teams, said the people, who asked not to be identified because the plans haven’t been announced.

The GSP Baseball Fund will accept a maximum 100 investors and has a minimum contribution of $1 million, one of the people said. The fund has received regulatory approval from all of the required federal agencies, that person said.

The National Basketball Association is mulling a similar approach.

That league sent a memo in March to owners saying that it was exploring the potential formation of “a new capital vehicle to that could purchase passive, minority ownership interests across multiple NBA teams.” But the structure and terms hadn’t yet been hammered out.

The NFL, meantime, is considering drastically increasing the amount of money prospective owners are allowed to borrow -- a move that would expand the pool of potential buyers for the richest and most-watched U.S. league.

Sal Galatioto, the head of Galatioto Sports Partners, has worked on a number of the biggest transactions in professional sports, including deals involving the Brooklyn Nets, Chicago Cubs, Golden State Warriors, New York Yankees and Washington Redskins. He recently represented the Los Angeles Dodgers in their minority stake sale.

Prior to creating GSP in 2005, Galatioto was managing director of sports advisory and finance at Lehman Brothers.