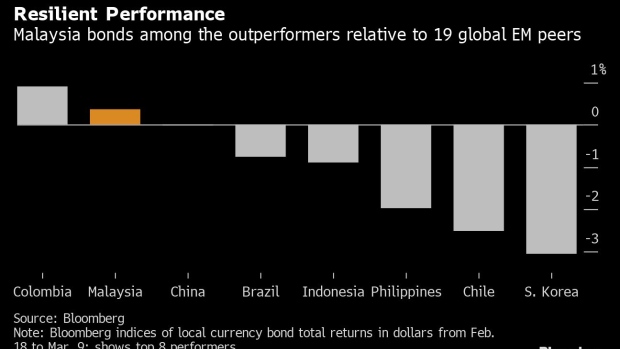 A worker walks down the steps of a silo for filtered palm oil at the IOI Corp. Gomali palm oil estate in Gemas, Johor, Malaysia, on Wednesday, June 10, 2020. Palm oil stockpiles in Malaysia posted a surprise drop as of end-May as production in the world's second-largest grower eased for the first time in four months. , Bloomberg

(Bloomberg) -- Investors looking for shelter from the upheaval in global markets are turning to Malaysia.

The exporter of oil and crude palm oil has seen its stocks, currency and bonds outperform most of their peers since the war in Ukraine broke out. Soaring commodity prices are expected to boost Malaysia’s coffers and enhance its current-account surplus.

The commodities boom is luring funds to the Southeast Asian nation, after sentiment was hit earlier by political turmoil and a widening fiscal deficit. The economy’s ability to attract inflows could help it weather the volatility fueled by rising interest rates in developed markets.

Ringgit sovereign bonds have gained 0.2% since Russia invaded Ukraine on Feb. 24, beating all but one of their 19 major emerging-market peers tracked by Bloomberg. The benchmark 10-year yield has held around 3.67% in that period.

Much of the outperformance has been driven by Malaysia’s position as a net exporter of oil and agricultural products, according to Frances Cheung, a rates strategist at Oversea-Chinese Banking Corp.

Malaysia is the only emerging Asian economy which runs an oil and gas trade surplus, with trade in energy accounting for 0.4% of GDP, according to a March 7 note from DBS Group Holdings Ltd.

Brent crude has rallied as much as 44% since late February as escalating tensions in Ukraine add to jitters about a shortage of supply. Palm oil prices have climbed to a record, giving Malaysia, the world’s No. 2 producer, an added boost.

Ringgit securities have also become less sensitive to swings in Treasuries, which mean they’ve been spared some of the volatility which has rocked the world’s biggest bond market. The 60-day correlation between U.S. and Malaysian 10-year debt has fallen close to zero from 0.30 six months ago.

Malaysian bonds may also benefit from JPMorgan Chase & Co.’s decision to drop Russian securities from its gauges. Such a move could push up the weighting of ringgit sovereign notes by 0.8 percentage points to almost 10% in a JPMorgan emerging bond index, Goldman Sachs Group Inc. said in a Feb. 28 note.

To be sure, a further rise in crude prices may become a burden for Malaysia. Exports account for about two-thirds of gross domestic product and the drag on global growth from costlier oil is expected to be negative for trade. High commodity prices have already raised government subsidies on fuels and cooking oils, Finance Minister Zafrul Abdul Aziz said in parliament on Thursday.

But for now, other asset classes have also benefited. Malaysian equities have reeled in $985.4 million this quarter, putting them on track for the biggest three-month inflow since 2017. The benchmark stock index has gained 4.5% since end-January to beat all but one of its major peers in Asia.

Similarly, the ringgit has strengthened 0.4% versus the dollar since Feb. 24, making it the region’s best performer after the Indonesian rupiah. The median forecast in a Bloomberg survey of analysts is for the ringgit to climb to 4.13 by year-end from around 4.19 now.

“Rising oil prices provide a buffer for the ringgit in these uncertain times,” said Qi Gao, a currency strategist at Scotiabank in Singapore. “By the end of the year, we expect a stronger ringgit given that the Federal Reserve rate hikes will be fully priced in and global inflation concerns will probably recede.”