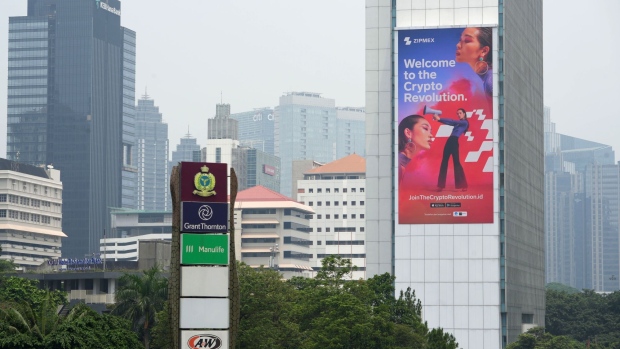 An advertisement for the crypto-asset exchange Zipmex Pte in Jakarta, Indonesia, on Thursday, April 12, 2022. Indonesia will start taxing crypto transactions and assets next month, along with some financial-technology services. , Bloomberg

(Bloomberg) -- Some shareholders and potential investors in Asian crypto exchange Zipmex Pte are urging Chief Executive Officer Marcus Lim to step down over management decisions they argue led to a severe cash crunch, people familiar with the matter said.

Zipmex, which capped withdrawals last month after exposure to troubled crypto lender Babel Finance hurt its finances, on Monday was granted more than three months of protection from creditors by Singapore’s High Court. The reprieve will give the firm additional breathing room to come up with a funding plan.

One large Zipmex shareholder has written to Lim asking him to resign, citing a loss of trust among partners and the fallout from the Babel exposure, one of the people said. It wasn’t clear how many investors support the effort to remove Lim.

“The internal matter of senior executive positions (including responses to this letter) is being handled by the board and shareholders,” Lim said in a statement to Bloomberg. “We will be dealing with this privately and after we have resolved the operational issues.” The management team is focused on executing the company’s recovery plan, Lim added.

While the company has allowed clients to withdraw some tokens, any complete easing would require a capital infusion into Zipmex, according to the people. Some potential investors in Zipmex’s proposed fundraising want Lim to resign before agreeing to put in money, they said, asking not to be named discussing private deliberations.

The company will hold an extraordinary general meeting on Aug. 17 to discuss the situation, the people said. Lim owns almost 25% of Zipmex.

Zipmex is in talks with several investors to raise money and is going through due diligence, according to a statement on its website. The management team is trying to wrap up a deal quickly so it can provide liquidity to customers, said Proud Limpongpan, Zipmex’s chief marketing officer.

“There has been a lot of investor interest in Zipmex,” Proud said. “At the core, we are still very strong as a company. However, it is not abnormal for there to be requested changes at the management level.”

Zipmex joined crypto firms including Celsius Network, Voyager, Vauld and Hodlnaut in facing a liquidity crunch. Their troubles followed a $2 trillion digital-asset market meltdown that caused leveraged bets to implode across the industry, triggering a chain reaction of defaults.

Zipmex has a license for digital asset trading from the Securities and Exchange Commission of Thailand, according to its website. It also has offices in Indonesia and Australia.

In Singapore, the exchange holds an exempted payment service provider permit, rather than a full license under the central bank’s new regime for crypto asset firms. Zipmex isn’t currently regulated by Singapore’s central bank, which means that customers will not be able to recover all of their funds held by the company if it fails, according to its website.