After posting the weakest annual profit growth since 2016, Canada’s banks now must prove to investors that it’s still worth buying their shares.

The S&P/TSX Commercial Banks Index has lagged a broader Canadian market measure since last year, with shares of the nation’s eight largest lenders — which constitute about a fifth of the overall benchmark — gaining a mere 13 per cent since the end of 2018. That performance lags the S&P/TSX Composite Index’s climb of 25 per cent.

“People are concerned about the economic cycle and banks are cyclical stocks at the end of the day,” Steve Belisle, a senior portfolio manager with Manulife Investment Management, said in a phone interview. Investors “don’t want to introduce too much cyclicality in their portfolio, and I think that’s what has been reflected in the performance of the stocks.”

“While investors are bracing for another year of challenging EPS growth, we believe that the lack of negative surprises and a stable EPS outlook could be enough for stocks to bounce,” the analysts said. Royal Bank, the largest Canadian lender, kicks off the reporting season Friday for the quarter ended Jan. 31.

“There’s a case to be made that each of these factors will not be as severe,” Malhotra said in an interview. “In particular, the market-sensitive businesses — both capital markets and wealth management — are going to have a good quarter.”

Not everyone is as optimistic. Canaccord Genuity Group Inc.’s equity strategist downgraded the sector to a sell-equivalent rating earlier in February amid “challenging” fundamentals. Business lending is slowing down at a “rapid pace,” catching up with the contraction seen in U.S. commercial and industrial loans, Martin Roberge said in his report.

Declining interest rates also threaten net interest margins — the difference between what a bank charges for loans and pays for deposits. Bank of Canada Governor Stephen Poloz has left the door open for a rate cut this year, confirming Roberge’s view of a growth slowdown. 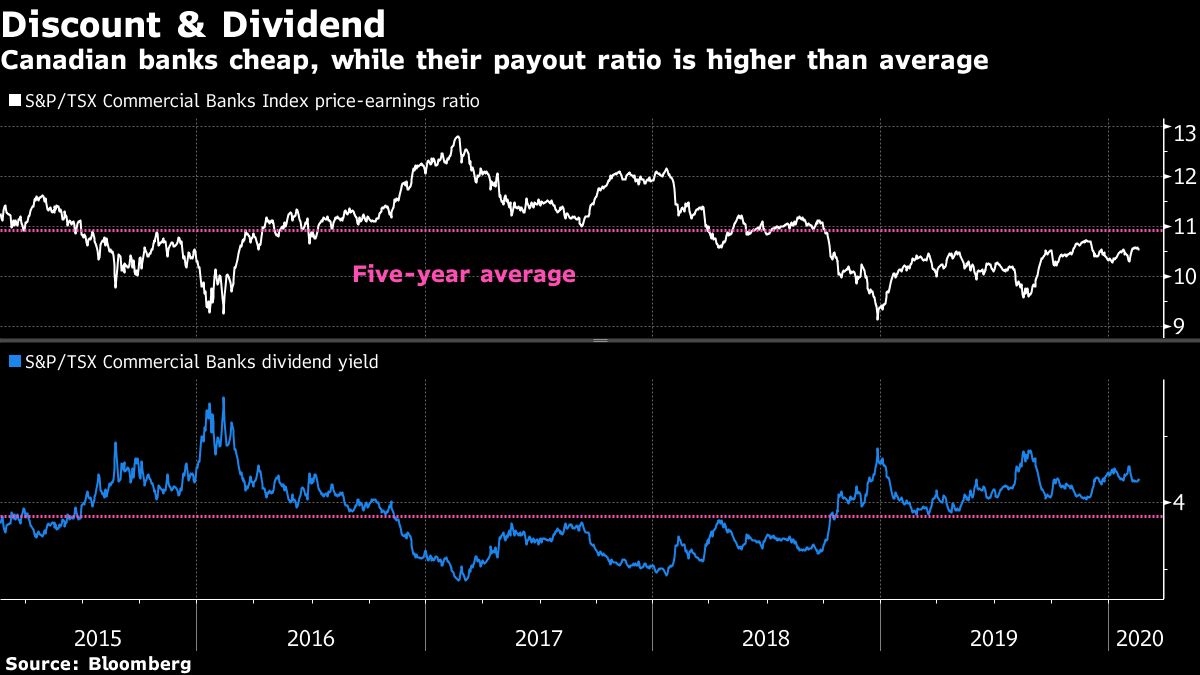 Credit performance will be key, given its drag on the industry’s earnings growth last year.

Benjamin Sinclair, an equity analyst at Odlum Brown, sees credit as the No. 1 concern going into the quarter.

“With the Canadian banks, credit is always going to be top of mind,” he said. “We’re not just talking about charge-off ratios, we’re talking about delinquencies, impaired loans, that sort of thing.”

Net interest margins are his second-biggest concern, followed by expenses, Sinclair said, noting that it is important for the banks to be more cost-conscious when it’s harder to make money. “I’d want to make sure they are not getting ahead of themselves in a tougher revenue environment,” he said.

Valuations have dropped since a peak in 2017 and are now trading below the five-year average, according to data compiled by Bloomberg.

“They’re not expensive, so that helps, certainly,” Manulife’s Belisle said. “Outside of a recession or a very material deterioration in the economic environment, these stocks should perform well considering the valuation they’re trading at.”

With discounted valuations, Sinclair sees “pessimism built in” for bank shares, but they achieve their purpose of being core holdings for dividend-hungry investors. The dividend yield sits at 4.17 per cent, above the five-year average of about 3.9 per cent, according to Bloomberg data.

“In the grand scheme of things, we’re quite long-term investors and we plan to ride out all of these cycles. They’re still banks that help us help our clients invest for the long term,” he said, after adding that they haven’t cut their dividends for decades.