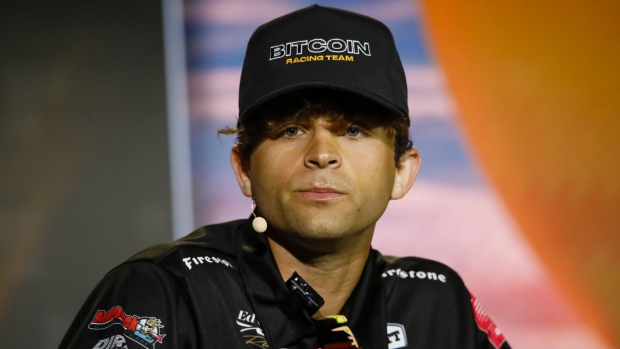 Jack Mallers, founder of Zap, listens during the Bitcoin 2021 conference in Miami, Florida, U.S., on Saturday, June 5, 2021. The biggest Bitcoin event in the world brings a sold-out crowd of 12,000 attendees and thousands more to Miami for a two-day conference. Photographer: Eva Marie Uzcategui/Bloomberg , Bloomberg

(Bloomberg) -- Just a few months ago, Jack Mallers was pretty much indistinguishable from the horde of baseball cap and hoodie-wearing young men touting Bitcoin. Now venture capitalists are clamoring to offer him money.

The 27-year-old founder of a Bitcoin money-transfer startup Zap Solutions Inc. burst onto the mainstream in June when El Salvador’s President Nayib Bukele embraced Bitcoin. Mallers, who was reduced to tears while on stage at a Miami conference when the announcement was made via video, had been working behind the scenes with the government to make it happen. Zap expects to finalize fresh funding soon, Mallers told Bloomberg News.

While it’s not El Salvador’s exclusive Bitcoin payments provider, Zap’s app, Strike, is the most popular mobile application in the Central American nation; it allows anyone to send or pay with Bitcoin for free.

Investors have taken notice. Mallers, who is based in Chicago, said in an interview that he is hoping to close a new funding round in the next few months. He wouldn’t disclose how much the company wants to raise, or comment on a valuation. In April 2020, Zap raised $3.5 million for a $16.5 million post-money valuation.

The money will go toward an ambitious global rollout. Strike could be available in 50 to 100 countries by year-end, up from just El Salvador and the U.S., Mallers said. The service is being tested in the U.K., Canada and Australia. By year-end, Zap hopes to have millions of customers, up from in the hundreds of thousands today, he said.

The company likely faces hurdles such as varying regulations and licenses. While it’s registered with FinCen, Zap doesn’t appear to have a license in New York, for example.

Zap also plans to issue a Visa card later this year, which will let customers earn rewards in fiat or Bitcoin. The startup is a partner of Visa, which has formed similar business alliances with other crypto companies.

Whether the push turns into a successful company remains to be seen, according to Aaron Brown, a crypto investor who writes for Bloomberg Opinion.

“Mallers and Strike have a strong technology and an even strong ability to forge partnerships, including with Visa and El Salvador,” Brown said. “But this is an area with very big money, fast-changing sophisticated technology and strong political aspects. Picking a winner is not easy.”

There’s much about the startup that’s unknown. Mallers declined to say how many employees he has, for example. It had seven a year ago, he said.

While Mallers is known for posting provocative photos on Twitter, he actually is a scion of the world of traditional finance. His grandfather was the youngest chairman of the Chicago Board of Trade. His father sold a discount futures brokerage.

“Thanksgiving was talking about agricultural commodity derivatives,” he said. By the time he was 18, Mallers was a two-time state chess champion, and he dropped out of college about a month in. So his father suggested he take a coding boot camp.

Mallers said he would stay in his room for weeks at a time learning about Bitcoin. It helped that his stepmother is also immersed in the crypto world and goes by BitcoinMom on Twitter.

“We kind of formed this Bitcoin team,” Mallers said, explaining it was a sort of a family hedge fund. “Dad, stepmom and me. He is familiar with derivatives. My stepmom started the first Bitcoin Meetup in Chicago. My role was in engineering.”

Mallers’ name is listed on a patent, from his time working at a startup before turning to Zap. His parents funded efforts that eventually turned into Strike, he said.