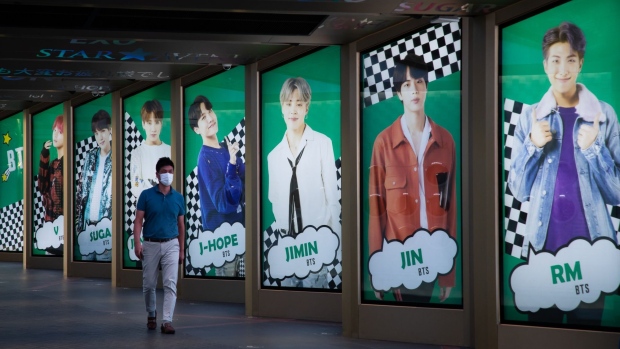 Confetti falls on Bang Si-hyuk, middle, and other attendees at the Big Hit Entertainment Co.'s IPO ceremony at the Korea Exchange in Seoul on Oct. 15. , Bloomberg

(Bloomberg) -- The world’s music fans are enamored with K-Pop. Investors maybe not so much.

On Thursday, following an initial public offering that was South Korea’s biggest in three years, Big Hit Entertainment Co., the agency behind K-pop sensation BTS, debuted with a bang. Its share price doubled at its open (the maximum allowed) and went on to rise as much as 30%, the daily limit for stocks in South Korea. However Big Hit stock subsequently pared those gains and closed below the opening price.

That’s in contrast to the buoyant performance of Kakao Games Corp., which went public in a $321 million IPO last month, and closed up at the 30% limit. The online gaming company’s listing was a massive hit with retail investors who submitted orders for 1,524 times the amount of stock on offer. Big Hit’s IPO was just 607 times subscribed.

Among reasons investors have been wary: Big Hit’s heavy dependence on the boy band --- BTS accounted for 97% of its 2019 revenue -- as well as high valuations. Big Hit is now trading at about 100 times its 2020 estimated net income. Concerns also linger over the looming conscription of the oldest BTS band member who turns 28 next year, the oldest age at which male citizens need to start a mandatory two-year military service. There’s uncertainty whether current Korean legislation to exempt “popular entertainers” like him will be passed.

It doesn’t help that Korea’s entertainment agency stocks tend to be volatile, with their performance mirroring the rise and fall of the bands they manage.

JYP Entertainment Corp., a major entertainment agency known for managing girl band TWICE, has traded below its IPO price the last 20 years. SM Entertainment Co., Korea’s oldest entertainment agency, rose more than 1,800% between 2010 and 2012 on the back of artists it managed like TVXQ and Girls’ Generation, but is now down about half from its 2012 high, as those bands are less popular now. YG Entertainment Inc. shares surged to 79,987 won in 2012 thanks to the popularity of rapper PSY of hit “Gangnam Style” that year. YG stock hasn’t reached that level since.

More ECM transactions we are following: