It began with a record crash in Chinese stocks on Wall Street and only got crazier from there.

The nearly US$1 trillion selloff ignited by Beijing’s shock ban on profits at tutoring companies has triggered a new round of soul searching about the investment case for Chinese assets in the Xi Jinping era.

After a week of wild market swings and tense calls with clients, some investors have decided China just isn’t worth the trouble. Others spot buying opportunities after valuations sank to the lowest level in decades. As Xi’s Communist Party attempts one of its biggest economic policy shifts since the 1980s, almost everyone agrees the regulatory onslaught has further to run.

Word begins spreading through chatrooms long before it becomes official: much of China’s booming tutoring industry will be forced to turn non-profit. Even after months of anticipation, it’s worse than investors feared. New Oriental Education & Technology Group Inc. loses half its value in an hour as short sellers pounce. Nirgunan Tiruchelvam, a research analyst at Tellimer, wonders which sectors will become targets next. High on his list: property, gaming and health care. 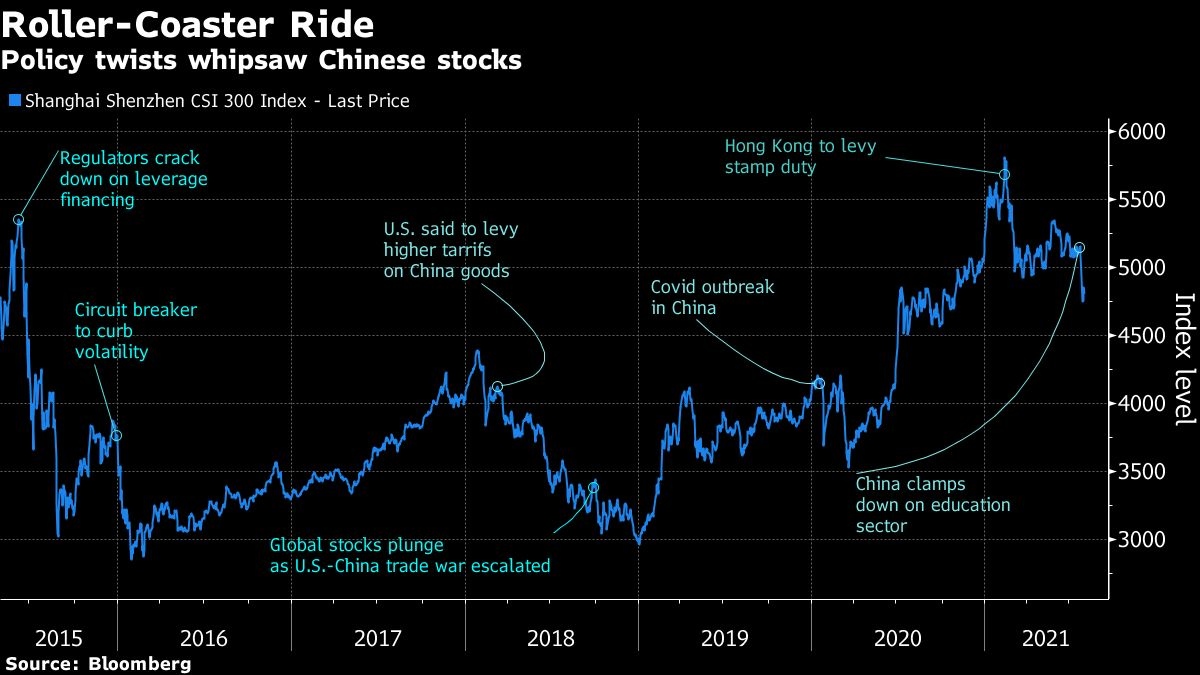 China’s housing ministry issues a warning to the country’s real estate companies, saying it will “notably improve order” in the property market and crack down on violations. China Evergrande Group, the indebted developer that some investors fear is on the brink of default, sinks to session lows.

The Hang Seng Index closes with a 1.5 per cent loss. There are few signs of widespread contagion, for now.

Soren Aandahl, founder of short seller Blue Orca Capital LLC, sees the headlines on his phone. His first thought: “Buckle up.” The U.S.-listed shares of New Orient and TAL Education Group tumble more than 40 per cent in pre-market trading. Less than six months ago, they were some of the highest-flying stocks on Wall Street.

The Nasdaq Golden Dragon China Index closes with an 8.5 per cent decline, after earlier falling by as much as 10.3 per cent. All but two of the index’s 98 members retreat. Some investors wonder if the tutoring crackdown could presage broader changes in the tenuous VIE structure used by most big Chinese companies listed in New York.

China orders Tencent Holdings Ltd. to give up its exclusive music streaming rights, the latest salvo in a months-long assault on the nation’s tech giants. Pony Ma, the company’s billionaire founder, has so far weathered the clampdown better than his long-time rival Jack. But that hasn’t stopped Tencent shares from losing a third of their value since February.

The government finally confirms its sweeping tutoring overhaul, saying the industry has been “severely hijacked by capital.”

Cliff Zhao, head of research at CCB International Securities Ltd. in Hong Kong, works through the weekend writing research reports. It was “just as busy as the U.S.-China friction in 2018 and the pandemic outbreak in March last year,” he says later. “These events have no precedent.”

“That’s nuts,” says Paul Nolte, a portfolio manager who helps manage US$4 billion at Kingsview Investment Management, as he watches Asian markets react to the weekend news. Nolte hasn’t owned Chinese shares directly since selling Tencent and Alibaba in 2019, but he’s beginning to worry about his exposure via holdings of global exchange-traded funds. The weighting for mainland- and Hong Kong-based stocks in the MSCI Emerging Markets Index has doubled in 10 years to about 35 per cent.

The open is ugly and Alvin Cheung’s clients are getting nervous. The associate director at Hong Kong-based Prudential Brokerage Ltd. says “no one knows,” when they ask him if the market is near a bottom.

The selloff is most extreme in the tech sector, but it’s starting to spill over. The CSI 300 Index of shares in mainland China tumbles more than 3 per cent. The rout is especially painful for Alice Wang, a 27-year-old who works in the education consulting business in Beijing. “We are in the front line for the hit,” she says later. “It’s a double whammy for me.”

China issues new guidelines for online food platforms, saying they must ensure the welfare of delivery workers. Xi has made “common prosperity” a cornerstone of his economic agenda amid rising discontent in China over the country’s yawning wealth gap. Food delivery giant Meituan, already under investigation for suspected monopolistic practices, tumbles as much as 15 per cent.

“The stock drops on Friday and Monday again took me back to my days in Indonesia” during the Asian financial crisis in the late 1990s, says Herald van der Linde, HSBC Holdings Plc’s head of Asia Pacific equity strategy. “There were moments where you just think -- Oh my God!”

Evergrande, the world’s most indebted developer, disappoints equity investors by deciding against a special dividend. S&P Global Ratings had cut its credit rating by two notches the previous night, the third downgrade by a global ratings company in about a month.

Tencent says in a cryptic statement that it stopped accepting new users for WeChat while the popular social media platform undergoes a “security technical upgrade.” New registrations will resume around early August, the company says. Investors see it as another reason to sell. The stock, among the most widely held in Asia, tumbles 9 per cent.

Trading desks are abuzz with unverified rumors that U.S. funds are offloading China and Hong Kong assets. The selloff in shares spreads to the yuan and S&P 500 Index futures. Treasuries rally as investors rush into havens. Prudential Brokerage’s Cheung doesn’t think the speculation has any merit, but it shows how fragile sentiment has become.

“China has a PR problem,” says Jason Hsu, founder and chief investment officer of Rayliant Global Advisors. “The market is saying ‘I don’t know what’s going on, so I am going to sell and then ask questions.’”

At Shenzhen JM Capital Co., fund manager Zhuang Jiapeng spends three hours on a call to convince one investor not to liquidate his China holdings. “Clients get freaked out when there are steep losses,” he says later. “It’s human nature.”

The Golden Dragon China index has now lost 19 per cent in the span of three trading days. Patrick Springer, managing director of institutional securities at Huatai Securities USA, has been busy fielding calls from clients since Friday. Some are wondering whether MSCI Inc. and its peers will rethink their push in recent years to boost China’s weighting in benchmark indexes. Others are nervous about what Chinese authorities might do to address the “three big mountains” of unaffordable education, health care and housing. “Investors think that the way the Chinese government tries to improve income inequality over the last few days is not good for future capital formation,” Springer says.

It’s another down open for the CSI 300, but some funds are snapping up shares of big banks and brokerages in bulk. Talk of the National Team’s arrival grows louder. Adding fuel to the rally: A flurry of articles in state media suggesting the rout was overdone.

China’s securities regulator does its part to shore up confidence, convening a hastily arranged virtual meeting with executives of major investment banks including Goldman Sachs Group Inc. and UBS Group AG. Some bankers come away with the message that the education policies were targeted and not intended to hurt companies in other industries.

The first positive open in five days gives bulls some breathing room, but reminders of the market chaos endure. Goldman Sachs Group Inc. analysts Kinger Lau and Timothy Moe write in a note that the regulatory crackdown has left some clients wondering whether China’s stock market has become too dangerous. “‘Uninvestable’ has featured in many of our recent conversations with clients,” they say. The bank’s prime brokerage desk issues a report showing that hedge fund clients focused on fundamental stock-picking for China are headed for their worst month on record.

After a day of relative calm and a 3.3 per cent gain in the Hang Seng Index, a Wall Street Journal report on Didi Global injects a fresh dose of volatility. The newspaper says Didi is considering going private to placate Chinese authorities and compensate investors for losses incurred since the company listed in the U.S. in late June. The ride-hailing giant had come under mounting scrutiny from Beijing after going through with its IPO despite objections from internet regulators, who have grown increasingly worried about the national security risks of Chinese tech giants that list overseas. Didi soars more than 40 per cent after the WSJ report, but pares most of the gains after the company says speculation about its privatization is untrue.

Evergrande is back in focus after a court freezes assets of its listed onshore subsidiary. More creditors are publicizing their disputes with the developer, fueling further investor concern about its financial health. The company’s shares plunge more than 9 per cent to their lowest level since January 2017 and one of its offshore bonds sinks to 39 cents on the dollar.

The CSI 300 finishes with an 0.8 per cent loss on the day and a 5.5 per cent decline on the week. After the close, there’s a flurry of action as authorities summon the country’s largest technology companies for a warning on data security, vow tighter oversight of overseas share listings and accuse ride-hailing companies of anti-competitive behavior.

A meeting of the Communist Party’s Politburo chaired by Xi offers investors little reassurance that the regulatory onslaught will slow in the second half. The 25-member Politburo pledges “improvement” in the system for approving overseas listings by companies, Xinhua reports, without giving details.

The clampdown “is something very hard to discount,” Tellimer’s Tiruchelvam says. “Investing in China is not for the faint-hearted.”