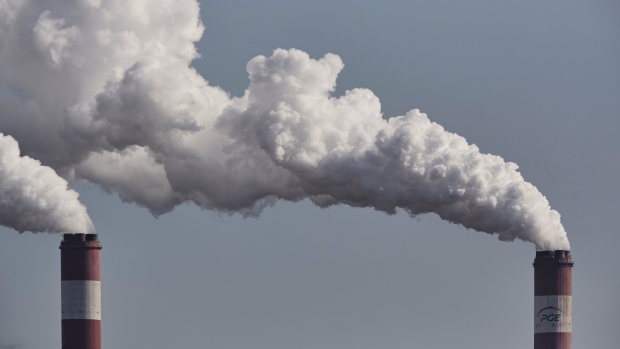 Vapor rises from chimneys at the Belchatow coal powered power plant, operated by PGE SA, in Belchatow, Poland, on Wednesday, April 28, 2021. Poland’s plan to carve out coal-fired power plants, which would free up state-owned companies to invest in clean energy, sparked a rally in the country’s biggest utilities. Photographer: Bartek Sadowski/Bloomberg , Bloomberg

(Bloomberg) -- Investors managing a collective $6.6 trillion are pressing the finance industry to boost funding for carbon-removal methods and standardize pollution credits as part of the effort to keep global warming within 1.5 degrees Celsius of pre-industrial levels.

Cutting the amount of carbon dioxide in the atmosphere should remain the primary focus for investors, according to a position paper from the United Nations-convened Net-Zero Asset Owner Alliance, a consortium of asset managers. As much as 1.2 billion metric tons of the greenhouse gas must be removed annually by 2025 to meet the goals laid out by the Paris Agreement.

“Financial incentives -- through a price on carbon, subsidies or tax rebates -- have been vital to accelerating the deployment of sustainable technologies thus far,” said Gunther Thallinger, the alliance chairman who’s also on the management board of Allianz SE.

Scientists have said keeping the planet’s warming within 1.5° C is key to staving off the worst impacts of climate change. Global emissions must be halved by 2030 to keep that target in sight, but governments are nowhere near that reduction, the nonprofit group Climate Action Tracker said last week.

Mobilizing private finance is considered a key challenge ahead of a UN-backed summit on climate change in Glasgow, Scotland, that starts Oct. 31. Carbon removal has been touted as a solution by the energy industry, though activists argue that focusing too much on that method could distract from the work of immediately reducing emissions.

Carbon markets, referenced in Article 6 of the Paris deal, will be another focal point at the climate talks following a lack of agreement in 2019 on how to link disparate systems globally. The asset managers called for an immediate increase in the quality of carbon credits, which would lead to higher prices.

“In essence, this means formalizing the use of carbon credits as a market proxy for a global carbon tax,” the alliance said.