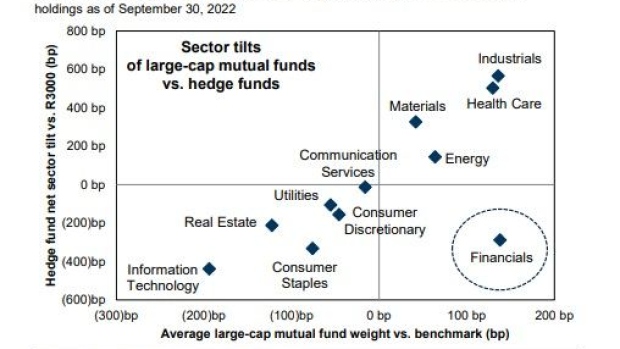 Pedestrians pass in front of the New York Stock Exchange (NYSE) in New York, US, on Wednesday, Nov. 9, 2022. US stocks declined following midterm elections that failed to yield a Republican sweep. Treasuries and the dollar caught bids in a sign of deteriorating risk sentiment. Photographer: Michael Nagle/Bloomberg , Bloomberg

(Bloomberg) -- Professional investors are loading up on bets that an economic recession can be avoided despite all the warnings to the contrary. It’s a dangerous bet -- for a variety of reasons.

Money managers have been favoring economically sensitive equities, such as industrial companies and commodity producers, according to a study from Goldman Sachs Group Inc. on positioning by mutual funds and hedge funds with assets totaling almost $5 trillion. Shares that tend to do well during economic downturns, like utilities and consumer staples, are currently out of favor, the analysis shows.

The positions amount to wagers that the Federal Reserve can tame inflation without creating a recession, a difficult-to-achieve scenario often referred to as an economic soft landing. The precariousness of such bets was on display Friday and Monday, when strong readings on the labor market and American services sectors drove speculation the Fed will have to maintain its aggressive policies, increasing the risks of a policy error.

“Current sector tilts are consistent with positioning for a soft landing,” Goldman strategists including David Kostin wrote in a note Friday, adding that the fund industry’s thematic and factor exposures point to a similar stance.

It’s not that the smart money has gone risk on. In fact, they’ve raised cash holdings or boosted bearish equity wagers this year as the Fed embarked on the most aggressive inflation-fighting campaign in decades. But underneath the defensive posture is a cyclical tilt, one that’s at odds with widespread concerns among the investment community that a serious economic retrenchment is in on the horizon.

In a Bank of America Corp. poll of fund managers last month, a net 77% expected a global recession over the next 12 months, the highest proportion since the immediate aftermath of the 2020 Covid crisis.

It’s possible that the pros are slow to adjust their portfolios to reflect the perceived economic risk. Or they’re seeking recession protection through other strategies, such as parking money in cash.

A more plausible explanation is linked to hopes that the Fed will be able to engineer a soft landing. In this case, bad economic news is viewed as good for the market as it shows that Fed Chair Jerome Powell’s inflation-fighting campaign is working and therefore policy makers can step back from the aggressive pace of interest rate hikes.

The narrative, described as a Fed pivot, is cited widely as why the S&P 500 has rallied more than 10% from its October lows despite worsening data in areas such as housing and manufacturing and a reduction in earnings estimates.

Now, the opposite is playing out. Stocks sold off Monday after an unexpected increase in a US service gauge sparked fear that the Fed may need to stick to its hawkishness. The S&P 500 dropped 1.8%, extending losses from Friday, when a stronger-than-expected employment report ignited jitters over Fed policy after Powell signaled a possible downshift in the pace of tightening.

“If growth deteriorates too quickly or goes too far, then ‘bad news is bad news’ will overtake the narrative,” JPMorgan Chase & Co.’s sales and trading team including Andrew Tyler wrote in a note Monday. “In that scenario, markets likely retest 2022 lows.”