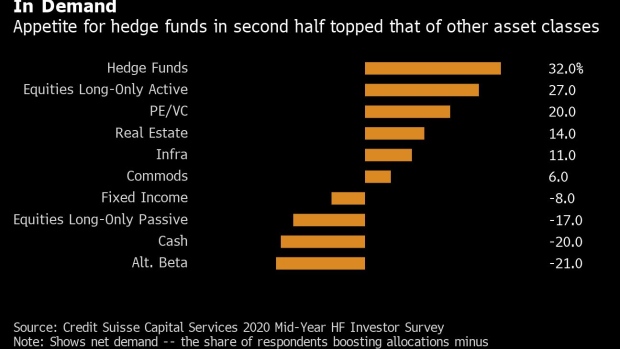 A pedestrian wearing a protective face mask walks past a Credit Suisse Group AG bank branch in Zurich, Switzerland, on Friday, April 17, 2020. Credit Suisse compensated managers and employees with additional shares in the bank after the price dropped sharply during the depths of a market correction spurred by the coronavirus outbreak. Photographer: Stefan Wermuth/Bloomberg , Bloomberg

(Bloomberg) -- Hedge funds are back in demand as institutional investors including pensions and endowments gear up for a return to choppy markets.

Investors are favoring hedge funds heading into the second half of the year, with the industry garnering the most interest among 10 major asset classes, according to a Credit Suisse Group AG report released this week. Net demand, or the percentage of respondents increasing allocations minus the proportion decreasing them, is the highest in at least five years at 32%, the data show.

“Given manager performance and the wider return dispersion we’re seeing, this is an environment where hedge funds can shine and separate themselves from the pack,” Joseph Gasparro, who helps hedge funds build capital as head of Americas capital services content at Credit Suisse, said in a telephone interview. “The incredible run-up in equities from late March to early June, the ‘easy money’ if you will, is likely not going to repeat. The environment going forward will include more uncertainties, with investors relying on hedge funds to help navigate.”

Hedge funds have largely held their own as the spread of the coronavirus pandemic halted the global economy, ending Wall Street’s longest-ever bull market and seizing up credit markets. They are down about 5% through May this year, roughly the same as the S&P 500 Total Return Index, according to data compiled by Bloomberg. After two months of net redemptions, the industry received inflows in May, eVestment data show.

Still, several prominent names, including Ray Dalio’s Bridgewater Associates, stumbled in the market chaos earlier this year. The Covid-19 crisis spurred the Federal Reserve to step in with trillions of dollars of stimulus, which helped spark a rally in stocks. For the past four weeks, the S&P 500 index has alternated between gains and losses amid growing concern over a jump in virus cases in some U.S. states.

That volatility may open the door for hedge funds. The industry outranked asset classes including private equity and venture capital, which have historically ranked higher in Credit Suisse’s survey.

About 56% of respondents said they have made or planned to make withdrawals in the second quarter, though they will largely be recycling their capital and keeping it within the industry. Of those who made redemptions, 92% expect to reallocate the capital to other hedge funds -- a five-year high.

Investors pivoted their hedge fund strategy preferences amid the pandemic, with equity and credit leading the pack, buoyed by soaring stocks as well as the Fed’s buying of bonds and loans. Earlier in the year, they also expressed interest in fixed-income arbitrage and volatility strategies.

“In March and April, we saw then that investors were leaning into the managers who they knew the best and had the most conviction in to navigate these waters,” said Melissa Toma Ryan, who co-heads the Americas capital services group at Credit Suisse.

Credit Suisse surveyed 160 institutional investors with about $450 billion in hedge fund investments in May and June for its 2020 mid-year survey.

Among the other findings: