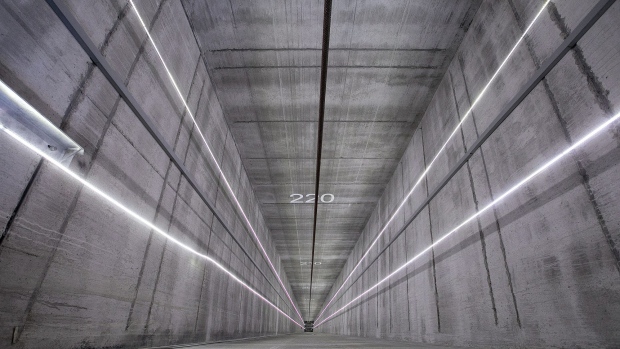 Lights run down the elevator test shaft as seen from the height of 230 meters inside the Thyssenkrupp Elevator AG test tower in Rottweill, Germany, on Tuesday, Aug. 14, 2018. At the site in southwestern Germany, one of the world's largest elevator companies is stepping up trials of the first system to operate without cables. , Bloomberg

(Bloomberg) -- Investors clamored to buy a piece of an 8 billion euro ($9.2 billion) debt offering to finance the acquisition of ThyssenKrupp AG’s elevator unit, shrugging off worries about weak lender protections.

The debt for Europe’s largest leveraged buyout in a decade was sold Tuesday after books swelled to about $23 billion. It follows recent jumbo deals for other buyouts and record U.S. junk bond issuance fueled by unprecedented central bank stimulus.

The sale removes a major headache for the six underwriting banks that have been holding the debt for months. They agreed to provide the financing to a consortium of private equity buyers including Advent International Corp. and Cinven Ltd. just as the coronavirus pandemic hit Europe’s credit markets in February.

The offloading of the risk was seen as a major litmus test, and could impact debt packages for any new wave of private equity buyouts in Europe.

The company priced a bond deal in five parts for a total of 2.25 billion euros and $2 billion across the two currencies, and loans split between a 1.015 billion euro and a $2.875 billion offering. Barclays Plc, Credit Suisse Group AG, Goldman Sachs Group Inc, Deutsche Bank AG, Royal Bank of Canada and UBS Group AG were the main arrangers.

ThyssenKrupp Elevator boosted its offering and tightened interest margins after making some lender-friendly changes to the deal’s documentation. Even so, credit analysts warned the debt still has some aggressive features, according to credit research firm Covenant Review.

“The terms of the notes remain extremely sponsor-friendly, with significant scope for value leakage,” Covenant Review analyst Caitlin Carey wrote in a note on Monday.

Lenders broadly view the elevator business as a good credit. Still, some chose not to buy the debt on concerns about leverage and the unit’s performance during the outbreak, according to multiple investors who looked at the deal. The market is underestimating the cyclical nature of the business and the many adjustments on financial metrics, they said.

Among the documentation caveats, Covenant Review noted “excessively liberal” adjustments to core earnings, off-market flexibility to test covenant metrics on a broad range of dates, and the ability to exclude a significant amount of debt from leverage calculations.