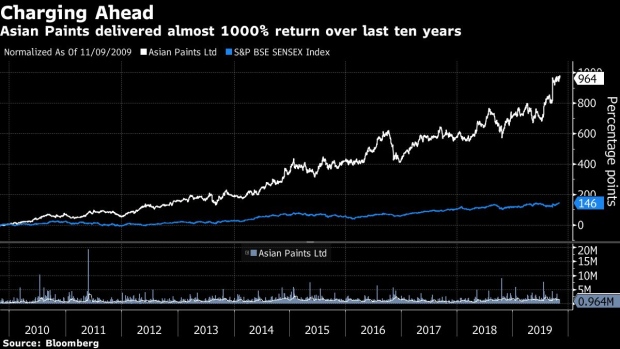 Paint swatches are displayed at a Lowe's Cos. store in Louisville, Kentucky, U.S., on Tuesday, Feb. 26, 2019. It was a cold winter for Lowe's Cos., but sales largely held up. And now, Chief Executive Officer Marvin Ellison said demand for home improvement goods is starting to heat up, one day after rival Home Depot Inc. reported results that fell short. Photographer: Luke Sharrett/Bloomberg , Bloomberg

(Bloomberg) -- Surrounded by all the doom and gloom around the Indian consumer sector, a paint producer got so much love from investors that it is now the most expensive stock in the country’s benchmark index.

Asian Paints Ltd.’s price-to-earnings ratio of 80.1 makes it the highest valued on the S&P BSE Sensex Index. The paint manufacturer has climbed 29.5% in the last six months -- when the broader gauge was up 6.7% -- and has hit a record high in the past month.

Investors value its ability to churn out a record profit at a time when management at other consumer-oriented companies have warned of the impact from an economic slowdown. Of the 39 analysts who cover the stock, just four have the equivalent of a sell call. India’s paint industry, which Asian Paints dominates with around 40% market share, has been viewed as a haven.

“Asian Paints is likely to keep rising” thanks in large part to double-digit growth in its volume of paint sales, said Abhijeet Kundu, an analyst at Antique Stock Broking Ltd., who estimated the increase to be 15%-17% in the last quarter. “There are very few companies that are growing at that kind of rate.”

Consumer businesses are suffering in India as economic expansion has slowed to a six-year low, exacerbated by a credit crunch amid a shadow banking crisis. Consumers have also tightened their belt as the unemployment rate hit the highest in 45 years. Even the recently concluded festival season doesn’t seem to have lifted spending by much, with shopkeepers reporting a poor show.

Defying weakening consumer confidence, Asian Paints’s net income has risen for two straight quarters to a record 8.3 billion rupees ($117 million) in the July-September period. Over the past 10 years, the firm has returned investors almost 1,000%, the third highest among stocks on the Sensex index.

To be sure, the company is not totally immune to the economic malaise. Its revenue growth has stalled this year, and an unexpectedly long rainy season also crimped demand. Asian Paints didn’t respond to emails and calls requesting comment.

Analysts say the weakness in revenue is due to price cuts and popularity of cheaper products rather than a substantial decline in demand.

For bulls, the company also stands out on management track record. Its decades-old tradition of prioritizing corporate governance, rare in a country that’s still dominated by family-run businesses, is valued by long-term investors.

Asian Paints is one of the rare companies in India that has always had a genuinely independent board, Saurabh Mukherjea, co-founder and chief investment officer at Marcellus Investment Managers, wrote in his book “The Unusual Billionaires.”

“If you want to build an institution where changes in the external or internal environment don’t matter, it has to start at the top with great corporate governance,” said Rakshit Ranjan, co-founder and fund manager at Marcellus. “I don’t think you could find 10 other companies in the country with the same level of corporate governance as Asian Paints.”

--With assistance from Abhishek Vishnoi.

To contact the reporter on this story: Ronojoy Mazumdar in Mumbai at rmazumdar7@bloomberg.net

To contact the editor responsible for this story: Lianting Tu at ltu4@bloomberg.net