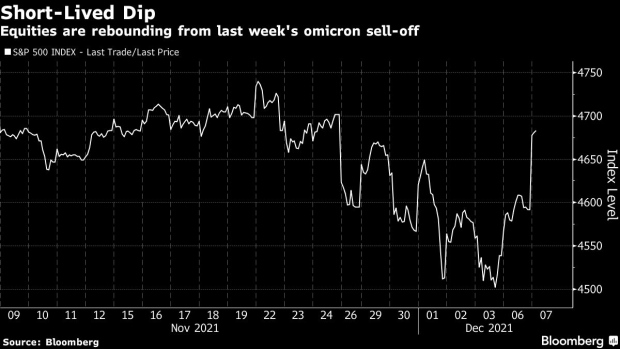 The S&P 500 staged its biggest rally since March to wipe out losses from the past week. The speculative fringe that was a smoldering wreck Friday was soaring Tuesday. An index of meme stocks rallied more than 4%, while one composed of airlines added 1.6%. A gauge of newly public companies advanced more than 4%, SPACs jumped more than 2% and even cryptocurrencies rallied, with Bitcoin powering back above $51,000.

It’s a stunning about-face for risk assets that went into a tail spin after the Federal Reserve chair suggested he favored accelerating the removal of monetary support. What follows are takes from market-watchers on why the market is looking past the Fed’s potential change in policy:

“It was the variant’s negativity compounded by his statement. But equally we’ve all known that it hasn’t been transitory for some time. They’re not going to take a radical move, they’re just bringing forward the rate rises slightly. My sense is that that was just, it was compounding the fragility of the markets with the variant and now that that’s been factored in, the variants didn’t seem as bad, markets have kind of digested that.”

U.S. investors woke up Tuesday to some decent news on the virus front, with GlaxoSmithKline Plc saying its vaccine was 71% effective against the new strain. That followed data Monday from South Africa that suggested omicron effects were relatively mild.

“I strongly believe that the data coming in from Omicron is totally driving the market,” said Kim Forrest, chief investment officer at Bokeh Capital Partners.

“Over the weekend I noticed more of the mainstream media publishing reports of mild cases, though the market was poised for recovery. The supply chain woes, especially around autos, seems to be receding quickly and I am noticing more people staffing businesses that had been under pressure, especially restaurants. Santa Claus looks ready to rock.”

“The market was definitely in a shoot-first, ask questions later mode after the discovery of omicron. The knee-jerk reaction was to sell everything risky and seek safety in Treasuries. We got dramatically oversold very quickly and as more Covid news emerges, investors are more comfortable owning risk again as we have adequate vaccines and antivirals to not stall the recovery.”

Economic data has been light so far this week after the softer-than-expected jobs report. The biggest report is the latest reading on consumer prices, due Friday. Some investors speculated that will give the Fed some pause in its move to accelerate winding down asset purchases.

“There was an immediate reaction that was very negative in the market but people at the end of the day are thinking that OK, the Fed is just getting some room for maneuver. People are now thinking maybe we went too far in terms of how many rate hikes there are going to be next year. Two is OK. We’re not so sure about the third one. At the end of the day it’s not a game-changer in monetary policy.

Cate Faddis, Grace Capital President and CIO, suggested the market remains unconvinced the so-called Fed put will ever go away.

This means the market does not believe that the Fed has truly pivoted from its decades-long dovish stance. It has concluded that ultimately it may be irrelevant to fundamentals. The inflation we see today is not due to cheap money, so raising rates will not have any impact. Raising rates will not solve the supply chain problem or resolve pent up demand from an economy that is finally opening up.

Part of the support came from institutional clients, according to data from Bank of America:

“Clients were big buyers of the dip last week, with inflows from all client groups and into both single stocks and ETFs. Inflows were the largest in Tech, Discretionary & Financials; only Industrials, Health Care & Utilities stocks saw outflows. Buybacks picked up to their highest level since March. YTD buybacks still tracking below 2019 (pre-COVID) levels.”

Not everyone was certain the rally would last. The S&P 500’s 2% gain has it on track for a move of at least 1% for the seventh time in eight sessions, a bout of turbulence not seen so far this year. Matt Maley of Miller Tabak + Co. had this to say:

“There is no question that things have changed in recent weeks. Whenever the stock market has seen a big one-day decline for most of this year, the market has bounced-back very quickly -- and kept on rising pretty much each time. This has changed in the last week and a half. Don’t get us wrong, the stock market has been able to bounce back quickly after the big down days recently, but it has not been able sustain those bounces like it has for most of this year. Instead, more severe declines have ensued shortly after those bounces.”

“To be fair, I would expect the same pattern next time, whether it’s something with the Fed, fiscal policy, tech stocks, or geopolitics. The tricky part may be if we get into a tough slog in 2022 if stocks revert back to historical trends of 5-10% total returns per year. Three years of shoot-the-lights-out performance may be lulling investors into a sense of complacency.”