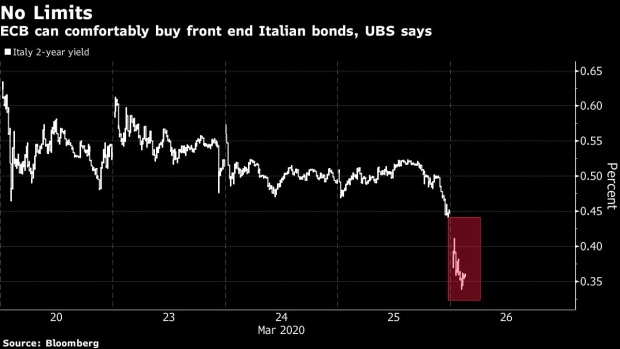 Yields tumbled from Germany to Italy after the central bank scrapped issuer-wise limits on debt purchases under its new 750 billion-euro ($819 billion) emergency program aimed at combating the coronavirus impact. The move removes a major hurdle to the institution’s ability to load up on euro-area debt.

The so-called issue limits -- which constrained ECB bond buying to a third of each government’s debt -- “should not apply” to the emergency plan, the central bank said. In addition, the program would also include bonds with shorter maturities than under its ongoing quantitative-easing operations.

“It is fully flexible -- so no restrictions on bonds and issuer limits, and there’s an increased maturity range,” said Jens Peter Sorensen, chief analyst at Danske Bank AS. “So the ECB can pretty much do whatever they want.”

The yield on 10-year German bonds fell five basis points to minus 0.31%, while similar rates in Italy slumped ten basis points to 1.44%. Greece’s 10-year debt is eligible for ECB purchases under the new program. Its yield plunged 27 basis points to 2.09%.

It marks a dramatic turnaround in the fortunes for peripheral bonds since the ECB’s last official meeting, when President Christine Lagarde prompted a dramatic selloff after saying the institution wasn’t there to close spreads.

Over the past two weeks, the institution has cleared the way for several new measures that directly support the region’s most indebted nations, including more QE and the possibility of crisis-era Outright Monetary Transactions.

“Normally, legal texts are only for ECB nerds, this time the changes were significant,” said Jan von Gerich, chief strategist at Nordea Bank AB. “They can push spreads where they want to in the short term.”

For Jamie Costero, a rates strategist at UBS Group AG, the scrapping of the rules should also help to ease some of the liquidity issues faced by traders since the coronavirus crisis, which has caused prices to swing wildly.

“Dealers can offload risks with the ECB comfortably and help to provide liquidity to the market, which is much needed,” he said. “This is huge.”

(Updates with context in sixth paragraph, comments from UBS and Nordea.)