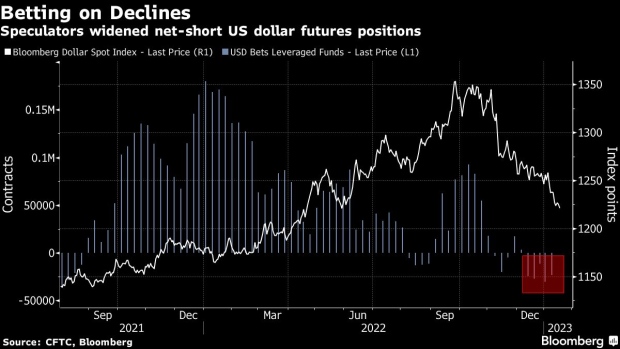 (Bloomberg) -- The America First trade that sent money gushing to the US over the past three years is finally starting to lose its shine as market optimism gravitates back to unloved markets outside of the world’s biggest economy.

In the first few weeks of the year, analysts at HSBC Bank Plc and Barclays Plc have upgraded their recommendations for equities in Europe and emerging markets and strategists at Goldman Sachs Group Inc. forecast that inflows to non-US assets will accelerate. Cash has rushed into funds that track the two regions and underweights on US stocks have surged to their highest in eight years, according to Bank of America Corp.’s global fund manager survey.

It’s a reversal of a trend that’s seen some $540 billion pour into US equities since 2019, according to estimates by Barclays citing EPFR Global data. The America First trade, built on the idea that growth would keep pumping up corporate earnings in the US, is losing its allure as the risk of rising interest rates and an energy crisis abates in other markets. That’s focused attention on how cheap their assets are by comparison.

“It’s reasonable to expect rest-of-the-world equities to outperform the US for some time this year,” said Chris Iggo, chief investment officer of core investments at AXA Investment Managers. “Valuations were much more attractive in Europe and Asia so there is more upside relative to US equities which, on a market cap basis at least, are still very expensive.”

The trend is already showing up in returns data. An index of global stocks minus the US is headed for its third best month in the past decade with a 7.9% gain, while the S&P 500 has climbed just 2.3%. The US equity benchmark plunged the most in a month Wednesday as signs of an economic slowdown showed up in data on consumer demand and business investment. The index of global stocks excluding the US added 0.5%.

Meanwhile money managers added $2.8 billion to European, Japanese and emerging-market stock funds in the week through Jan. 11, while they yanked $2.6 billion out of US stock funds, according to EPFR.

Of course, the reversal could be short-lived if any of the risks that plagued Europe and developing nations last year come back to the fore. The war on the eastern edge of Europe is still in full swing, posing a major threat to energy security, and optimism about a soft landing from the global downturn could turn out to be unfounded.

A big part of the shift can be be explained by dollar weakness, which has lowered costs for importers outside of the world’s biggest economy and given a boost to emerging-market currencies. The greenback is heading for its fourth straight month of declines after the Federal Reserve’s aggressive tightening campaign helped lift it to a record high. Hedge fund bets against the currency have swelled to the highest level since August 2021, according to data from the Commodity Futures Trading Commission, and investors are unwinding cash positions that reached a two-decade high in October, according to Bank of America’s fund manager survey.

“There is more downside for the US dollar ahead as the rate of change of global growth is positive,” said Max Kettner, chief multi-asset strategist at HSBC, who recommends buying emerging-market bonds and stocks. “The overall global growth outlook is no longer as grim as, say, three months ago.”

Kettner’s optimism is based on the prospect of earnings revisions in Asia and the quicker-than-expected reopening of China from Covid-19 lockdowns. With concerns about an energy crisis in Europe largely laid to rest and the worst-case scenario of a hard landing looking less likely, comparatively cheap assets outside of the US will continue to attract investors this year, he said.

Inflows to US-listed emerging-market exchange-traded funds have already totaled $5.7 billion so far this year, according to data compiled by Bloomberg, but the America First trade was in favor for so long that there could still be lots of room to unwind. Short positioning on European stocks has a long way to fall after it climbed back to March 2020 levels last year.

“Europe had record outflows in the last 18 months versus record inflows to US, so there is room for some reversal here,” said Emmanuel Cau, head of European equity strategy at Barclays. “If rates volatility subsides and fourth quarter earnings meet expectations, we think it may prompt more inflows to equities.”