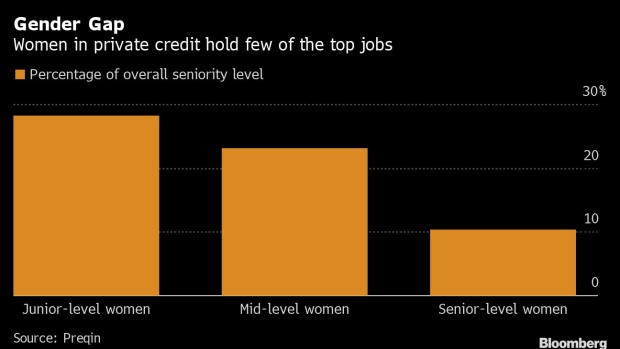 (Bloomberg) -- A specialized set of asset managers, responsible for investing $850 billion in higher-yield credit worldwide, is at risk of losing business unless it fixes its glaring shortage of women, especially in top jobs.Pressure to increase diversity is largely coming from those who oversee the big pools of institutional capital that fund the private-credit industry, made up of lenders that finance companies too risky to get conventional loans. Some investors are making their position crystal clear: If you’re asking for our money, there better be women sitting across the table from us when we strike a deal.

“We want our money to be managed and invested in entities that share our values and our priorities,” said Kim Thomassin, executive vice president of stewardship investing at pension fund Caisse de Depot et Placement du Quebec, which has C$333 billion ($254 billion) in assets, including C$35 billion invested in private credit. “When the stewards of large sums of capital, the institutional investors like us, all get together, it’s billions and billions of dollars and, frankly, money talks.”

Women now hold about a fifth of the industry’s jobs and just 10% of the senior positions as of last year, according to London-based research firm Preqin. By comparison, women on average hold 52% of the management jobs in U.S. industry and 22% of the leadership roles in financial services, according to the Bureau of Labor Statistics and Deloitte, respectively.

In theory, the sector’s rapid growth should create opportunities for private lenders to bring more women on board. Private credit has surged threefold since the 2008 financial crisis. Analysts expect assets to reach $1 trillion in the next several years.“Whenever you have growth there are always going to be more seats available at the table,” said Sylvia Owens, global private credit and real assets strategist at New York-based portfolio advisory firm Aksia.In spite of private credit’s past expansion, female employment has changed little in recent years, suggesting that hiring more women won’t simply happen on its own: It takes someone pushing from the outside.

“If the clients drive it and demand it, and they are very committed to it, then it tends to happen,” said Theresa Shutt, the chief investment officer at Laval, Quebec-based Fiera Private Debt, where women hold more than 15% of the higher positions.

“Investors are increasingly focused on diversity.”

The Connecticut Retirement Plans and Trust Funds, like Quebec’s provincial pension fund, is among those starting to insist. The $36 billion fund earlier this year approved a plan to invest as much as 5% of its assets in private debt, prioritizing managers focused on inclusion.

“Where there are investment managers completely devoid of diversity of any sort, that becomes an impediment to proceeding,” said State Treasurer Shawn Wooden, whose office manages the fund. Private credit, he added, needs “a lot of work.”Some big asset managers such as Bain Capital Credit and Barings -– both count private credit among their large investment offerings –- say they are trying address the lack of gender diversity in the industry by putting measures in place to boost women in the early stages of their careers. They also are offering boot camps on credit and alternative assets for college students or establishing support groups for women already in the industry.

Those in the private-credit business say the outside pressure is intensifying.

“We do see this request more and more," said Cecile Mayer-Levi, head of private debt for European alternative-asset manager Tikehau Capital, based in Paris.

New York-based Caspian Capital, which invests in a type of private credit considered distressed debt, earlier this year started a diversity initiative aimed at increasing the ranks of women and minorities. “The events this summer reiterated the urgency and focus,” said Kathryn Murtagh, general counsel at the firm. Caspian’s staff of two dozen is now more than 40% female, she said.

Meanwhile, alternative investment shop Varde Partners in the past five years has boosted its female investment professional headcount to 22%, from 9%. The Minneapolis-based firm, which invests in corporate debt, including private credit, has overhauled its hiring processes, including how it screens resumes and reviews promotions.“Investors are increasingly focused on diversity, and rightly holding managers to a higher standard,” Varde co-founder Marcia Page said in an email.This parallels how things have unfolded elsewhere in the campaign for greater gender equity. Corporations, for example, only put more women on boards of directors in response to demands from activists, pressure from big institutional shareholders or legal mandates in state legislation.The financial industry, long a laggard in hiring women for top management jobs, has also been pressed to elevate more women to top management jobs. Although many of the lower-paid employees in finance are women -- sometimes a majority of the workforce -- the upper ranks remain a male stronghold. It was only last month that one of the U.S.’s biggest banks, Citigroup Inc., broke the gender impasse by naming Wall Street’s first female chief executive officer.

The argument that diversity is desirable -- but it shouldn’t trump performance -- may not carry much weight with some institutional investors. More equitable gender balance doesn’t mean sacrificing returns, said Dhavni Shah, chief investment officer of the Illinois Municipal Retirement Fund, with $43.1 billion in assets.There is little hard data on the performance of private-credit firms that embrace diversity. But research on the broader $69 trillion asset-management industry shows there is no penalty for racial and gender equity, according a study by the Knight Foundation, a journalism think tank.

“It’s clear that you can generate strong results and embrace diversity,” said Curtis Johnson, managing director of investor relations at Carlyle Group, a Washington-based firm with $50 billion in global credit, including private credit.What may not be clear is whether private credit gets that message.