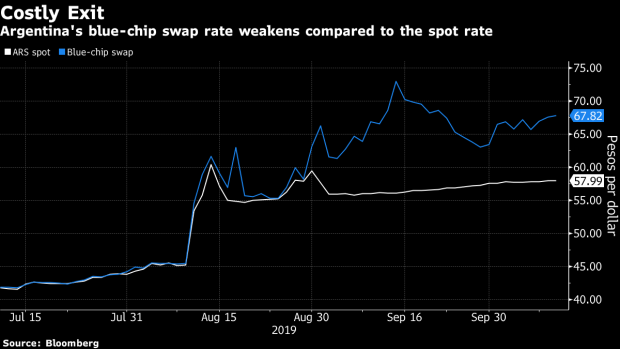 After getting shut out of international debt markets amid a collapse that has put the country on the verge of default once again, borrowers including oil producers YPF SA and Pan American Energy LLC are turning to peso bonds for financing. Yet instead of encountering risk averse money managers wary of all things Argentina, they’re getting significant interest from global investors that can’t repatriate funds, according to people with knowledge of the matter.

While asset managers can technically skirt controls by using a parallel exchange rate known as the blue-chip swap, some firms may be prevented from doing so by their own internal policies. And even though short-term government notes always remain a reinvestment option, many likely see company debt as a less-risky investment given the country’s current fiscal issues, the people familiar said.

Argentina late last month made an interest payment on its 142 billion ($2.4 billion) of peso notes due 2020 that are tied to the monetary-policy rate, a security largely held by foreign creditors.

The surging demand for local corporate debt may already be fueling pricing anomalies. YPF’s 3.5 billion peso reopening last week was issued to yield just 10 percentage points over the benchmark Badlar rate, significantly less than levels seen in the highly-illiquid secondary market, according to a person with knowledge of the pricing.

The Argentine government brought back capital controls on Sept. 1, following a roughly 25% plunge in the peso after a primary election in which opposition candidate Alberto Fernandez trounced President Mauricio Macri. The blue-chip swap rate is now about 14% weaker than the currency’s official spot price, according to data compiled by Bloomberg.

Representatives for the companies declined to comment on whether the offerings were initiated by a reverse inquiry. A Pan American Energy spokesman said the sale is intended to partially fund its drilling campaign in the Cerro Dragon hydrocarbon reserve.

To contact the editors responsible for this story: Daniel Cancel at dcancel@bloomberg.net, ;Nikolaj Gammeltoft at ngammeltoft@bloomberg.net, Boris Korby