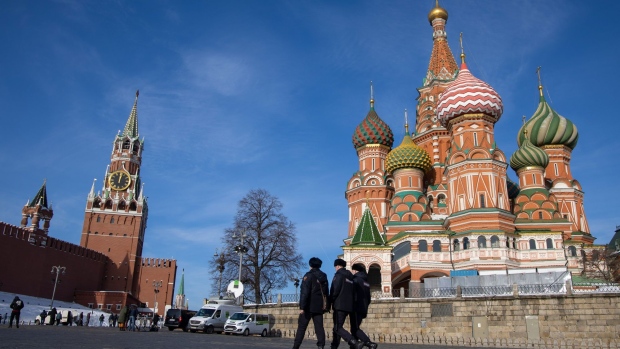 Police officers patrol Red Square, near the Kremlin, in Moscow, Russia, on Tuesday, Feb. 15, 2022. Russia announced the start of a pullback of some forces after drills that raised U.S. and European alarm about a possible military assault on Ukraine. , Bloomberg

(Bloomberg) -- Investors are lobbying the US government to extend a key waiver that’s allowed them to receive payments on Russian bonds despite sanctions.

The temporary exemption, which has helped Russia avoid a default, is due to expire on May 25, and Treasury Secretary Janet Yellen has indicated that the US will likely let it lapse. In a letter to the Treasury’s Office of Foreign Assets Control dated May 12, the Investment Company Institute, whose members manage about $31 trillion in the US, asked that OFAC extend the waiver by three months.

“At least from our perspective, it appears that the non-extension of this license would harm US investors and would not have a commensurate harm on the Russian government, specifically because they have indicated a willingness to pay out of non-sanctioned assets,” Eva Mykolenko, associate chief counsel at ICI Global, said in an interview.

The looming deadline is the latest chapter in Russia’s ongoing bond saga. Despite financial restrictions imposed after its invasion of Ukraine, the country has so far managed to avoid a default and get payments into the hands of creditors -- albeit not always smoothly.

Russia’s Finance Ministry said Friday that it had started the process of paying holders of two foreign-currency bonds a week before the funds are due. The payment would otherwise come after the carve-out expires.

A delay would also allow holders of depositary receipts tied to Russian companies more time to convert them to local shares. Many global exchanges have restricted almost all trading tied to Russian issuers, the letter notes.

“This extension is necessary as US persons that have wanted to divest of any sanctioned securities to non-US persons during the authorized period have been practically unable to do so due to a combination of market illiquidity in the aftermath of Russia’s invasion of Ukraine, market participants’ unwillingness to transact in Russian issuers, and measure taken by Russia to restrict the ability of non-Russians to trade securities on Russian exchanges,” the letter said.

A representative for the US Treasury declined to comment on the contents of the letter.

Extending the exemption would likely prompt Russia to continue draining its coffers to make debt payments, cash which could otherwise be used to finance the war. Still, any bond payments are more than offset by the hard-currency earnings Russia gets from exports of oil, gas and other commodities.

Ending the waiver would tip Russia once step closer to a default, its first on foreign debt in a century, and add to the country’s financial isolation.

“We will look to continue our engagement with OFAC on this and more broadly on sanctions,” said Mykolenko. “It doesn’t appear that this situation will be resolved quickly.”