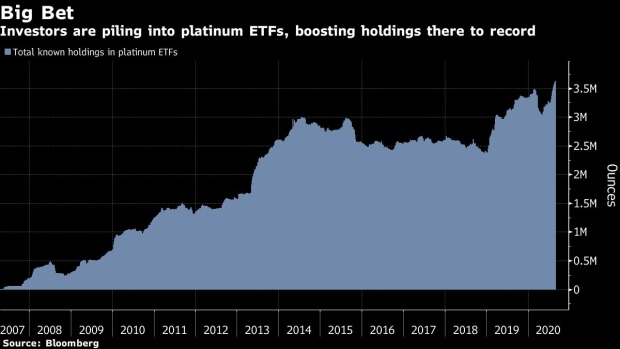 (Bloomberg) -- Platinum holdings in exchange-traded funds have surged to a record, raising the prospect of a catch-up rally for the precious metal after months of lagging gold and silver.

More than 600,000 ounces of platinum have been added to ETFs since mid-May, according to data compiled by Bloomberg, as investor demand partially offsets a drop in consumption from jewelry and the auto industry crippled by the coronavirus pandemic.

The buying spree was driven by investors who thought they were missing out on the recent rally in gold and silver, said Nitesh Shah, director of research at WisdomTree. There’s also probably been some money taken as a profit from gold and silver and added into platinum because it’s still relatively cheap compared with its peers, he said.

Most major precious metals have had a banner year in 2020 as governments and central banks including the Federal Reserve unleashed vast stimulus to aid economies hurt by the health crisis, sending investors to seek safety in hard assets amid concerns over currency debasement. Gold has rallied 29% this year, while platinum is still down about 3%.

“Platinum does seem like one of those metals that could be next if historic correlations are any guide,” Shah said.

Investment demand and worries over reduced supply from top producer South Africa after temporary closures of mines due to lockdowns have been supporting the metal. While platinum has rebounded about 66% from this year’s lows after a massive sell-off in March, its discount to gold is still not far from a record, with the silvery-white metal trading at half of bullion’s value.

“Ultimately, those questioning whether there are green shoots for platinum would do well to keep its performance in perspective,” said Steve Dunn, head of ETFs at Aberdeen Standard Investments. “While gold continues to receive the lion’s share of media attention, platinum has significantly outperformed since their lows” in March.

UBS Group AG is pinning its recent platinum forecast increase on its bullishness on gold and projected economic growth in the near term. The bank sees prices at $975 an ounce at end-September and end-2020 compared with about $935 currently. Yet, it cautioned that platinum’s fundamentals remain the bleakest among precious metals.

WisdomTree’s Shah believes platinum could flirt with the $1,000 mark in the next 12 months as the biggest consumer, the auto industry, is recovering faster than many anticipated. Platinum is widely used in catalytic converters in diesel vehicles.

“Near-limitless money printing by the Fed and global currency debasement are the prime drivers of the continuing rush to precious metals, including platinum,” said Ryan Giannotto, director of research at GraniteShares Inc. “Unlike other monetary metals, however, platinum is 16 times more scarcely produced than gold and extraordinarily concentrated in supply,” he said, adding that this should help support prices.