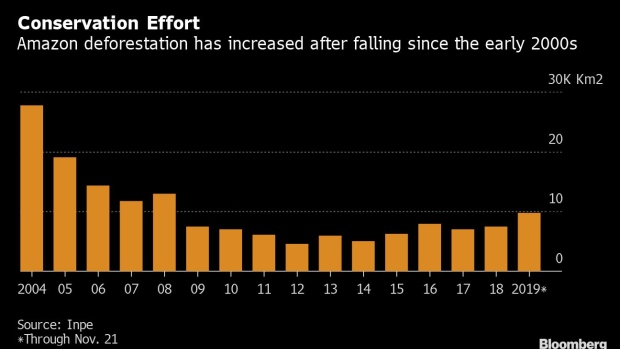 (Bloomberg) -- Investors managing about $3.2 trillion are calling on Brazil to stick to a pact that aims to prevent soybean-related deforestation in the Amazon and which has drawn criticism from farmers.

Money managers including Legal & General Investment Management and retailers such as Tesco Plc will send a letter to President Jair Bolsonaro’s government urging it to uphold the 2006 Amazon Soy Moratorium, according to Farm Animal Investment Risk & Return, which is coordinating the effort. The pact bars the trading of soy grown on land cleared after 2008 and aims to reduce emissions.

The moratorium has come under fire from Brazil’s top farm group Aprosoja on grounds that it’s stricter on growers than the law requires. Farmer calls to scrap the pact add to concerns about the pace of deforestation following recent rainforest fires and a Bolsonaro pledge to ease environmental regulations.

“We want to be able to continue to source from, or invest in, the Brazilian soy industry,” the signatories will say in the letter. “If the ASM is not maintained, this will risk our business with Brazilian soy.”

Brazil is the top exporter of soybeans, used in everything from cooking oil to animal feed. While the Amazon accounts for only about a 10th of Brazilian output, the moratorium benefits the reputation of the nation’s entire sector, according to the letter. Despite the pact, deforestation has continued in the Amazon -- mostly from cattle ranching -- with more than 500,000 hectares (1.2 million acres) being lost since 2012, the investors said, citing government data.

Brazilian soybean processor group Abiove is among those in support of the moratorium. Buyers know what they’re purchasing and trust their suppliers, according to Andre Nassar, the head of Abiove. Removing the moratorium could significantly raise the risk of sourcing beans from Brazil, according to Robeco Institutional Asset Management BV.

The moratorium “has a very effective way of taking away the pressure that agricultural development has on the existing forests,” Peter van der Werf, an engagement specialist at Robeco, said by phone. “It is crucial that it stays in place.”

The letter from the investor group also includes supermarket chain Carrefour SA, food producer Mars Inc. and funds such as Norway’s Storebrand Asset Management AS. Salmon farmers such as Mowi ASA and Cermaq Group AS also signed the letter.

(Updates with names of other signatories in last paragraph.)

To contact the reporters on this story: Agnieszka de Sousa in London at atroszkiewic@bloomberg.net;Tatiana Freitas in São Paulo at tfreitas4@bloomberg.net

To contact the editors responsible for this story: Lynn Thomasson at lthomasson@bloomberg.net, Nicholas Larkin, Patrick McKiernan