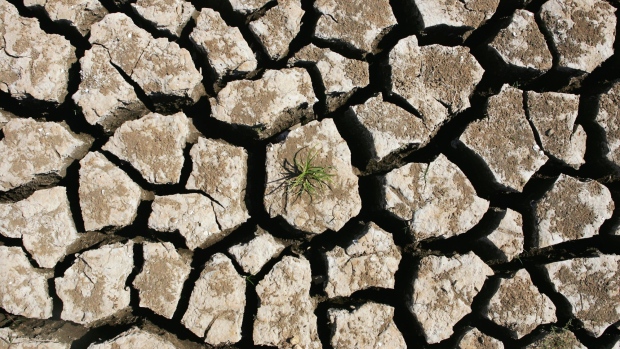 BRISBANE, AUSTRALIA - APRIL 10: Cracked earth is seen at Wivenhoe Dam on April 10, 2007 in Brisbane, Australia. Wivenhoe Dam is a major source of water to greater Brisbane area and is at a record low. Brisbane today entered level - five water restrictions and is the first Australian capital city to do so. (Photo by Jonathan Wood/Getty Images) , Photographer: Jonathan Wood/Getty Images AsiaPac

(Bloomberg) -- More than 500 investors with $35 trillion of assets calling on governments to take more action to combat climate change.

The request from a number of investor groups ahead of next week’s United Nations Climate Summit in New York adds to a growing chorus for increased efforts on tackling global warming. On Wednesday, another group of investment managers who oversee $16 trillion called on companies to implement anti-deforestation policies for their supply chains. Other investors have worked together to push companies directly to tackle climate-related risks.

“Climate change is such a critical issue for investors’ portfolios and there are so many risks associated with it and also huge opportunities,” said Stephanie Pfeifer, chief executive officer of the London-based Institutional Investors Group on Climate Change, one of the groups that signed a joint letter to leaders. “The right kinds of policies will help direct capital in an appropriate way so we are able to tackle the issue of climate change from an environmental perspective, but also safeguard portfolios.”

Rising temperatures has massive implications for investors. Clean energy investment is set to hit $2.6 trillion this decade, according to research by BloombergNEF, and that might not be close to enough to reduce the risks to the environment. The world must invest $2.4 trillion in clean energy every year through 2035 and cut the use of coal-fired power to almost nothing by 2050 to avoid catastrophic damage from climate change, scientists for the UN reported last year.

That kind of shift in capital flows toward new energy technologies means investors want more clarity from governments about regulation and other policies that will guide the transition.

The signatories to the letter, which include Legal & General Investment Management, Deutsche Bank AG’s DWS and BNP Paribas Asset Management, request more initiatives to achieve the goals of the Paris climate agreement and to set deadlines for the phasing out of fossil-fuel subsidies and coal plant use.

They also want stricter rules on corporate reporting of climate risks as recommended by the Task Force on Climate-Related Financial Disclosures. That task force was founded and is chaired by Michael R. Bloomberg, the majority owner of Bloomberg LP.

To contact the reporter on this story: William Mathis in London at wmathis2@bloomberg.net