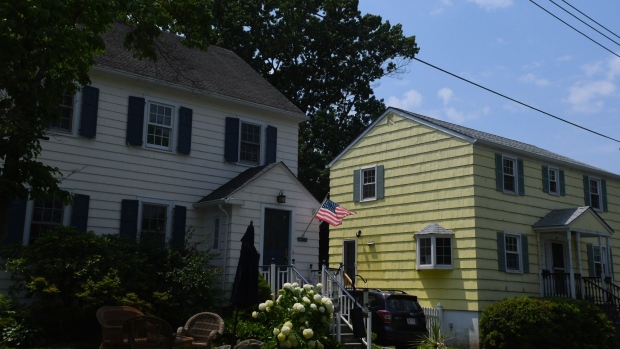 Houses in Westchester County in Larchmont, New York, U.S., on Monday, July 5, 2021. Contracts to buy suburban New York homes have scaled back from their frenzied pace at the height of the pandemic. Westchester County saw 20% more contracts last month than in June 2020. Photographer: Stephanie Keith/Bloomberg , Bloomberg

(Bloomberg) -- Invitation Homes Inc., the largest single-family landlord in the U.S., boosted rents by 8% nationwide in the second quarter as company hiked prices amid strong demand for suburban properties.

The company, which owns more than 80,000 homes, boosted rents by 5.8% on renewals and 14% on leases signed by new tenants, according to a statement Wednesday. The company also posted core funds from operations of 37 cents per share, beating the average analyst expectation of 35 cents for the key metric.

Invitation’s shares have increased about 36% this year through Wednesday, as single-family landlords have outperformed apartment owners and private equity has flooded into the asset. The pandemic has fueled intense demand for suburban housing, with Americans who can’t afford down payments increasingly looking to rental homes for backyards and extra space.

Invitation reported average occupancy of more than 98% for the quarter, giving the company power to set rents higher. Rents rose by nearly 24% on new leases in Phoenix, and more than 22% in Las Vegas, the highest increases out of the 16 markets in which the company operates.