Dentalcorp makes for largest IPO on TSX this year

Big IPOs are back in Canada. Companies are taking advantage of robust demand from investors, completing nine initial public offerings of at least $200 million (US$164 million) this year with more pending, according to data compiled by Bloomberg.

That puts the market well ahead of 2020’s pace, when there were 11 IPOs of that size for the whole year. This year’s list isn’t dominated by technology startups but by older companies that are raising money for growth or allowing their owners to cash in some gains.

That includes the return of formerly public companies such as space technology provider MDA Ltd. and Softchoice Corp., a Toronto-based information technology company that was bought out by Birch Hill Equity Partners Management Inc. in 2013.

Softchoice closed a $350 million initial offering this month, allowing Birch Hill to take out $249 million in proceeds while keeping control with a stake of about 60 per cent, according to the prospectus.

“We are a profitable growth company, and our financial performance is very strong,” Softchoice Chief Executive Officer Vince De Palma said in an interview. “We just felt this was a natural evolution of that growth, and the IPO certainly opens us up to more investment.” 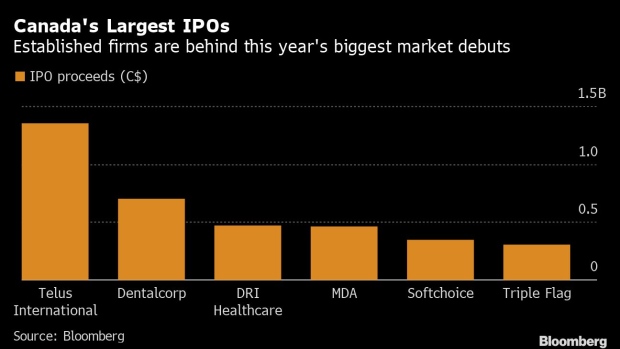