So far this year, 32 Canadian firms have announced IPOs set to raise a combined US$3.26 billion, according to data compiled by Bloomberg. The total is more than 10 times the US$305.2 million of deals announced by this time last year, and the most for a first quarter since 2006, when US$3.58 billion of public offerings were announced.

Global tech companies including Amazon.com Inc., Microsoft Corp. and Alphabet Inc.’s Google have made major investments in their Canadian operations over the past decade, drawing programming talent to the country and spawning startups that are now ready to make the leap to public markets. Those companies are finding healthy demand from Canadian fund managers who have long wanted to fill out their portfolios with homegrown tech names.

“We’ve had environments in the past where there was lots of demand from investors, but we just didn’t have the supply of companies that were ready to take that step to become public,” Tyler Swan, managing director and head of equity capital markets at Canadian Imperial Bank of Commerce, said in an interview. “Now there is a very long pipeline of companies that are taking those steps toward becoming public.” 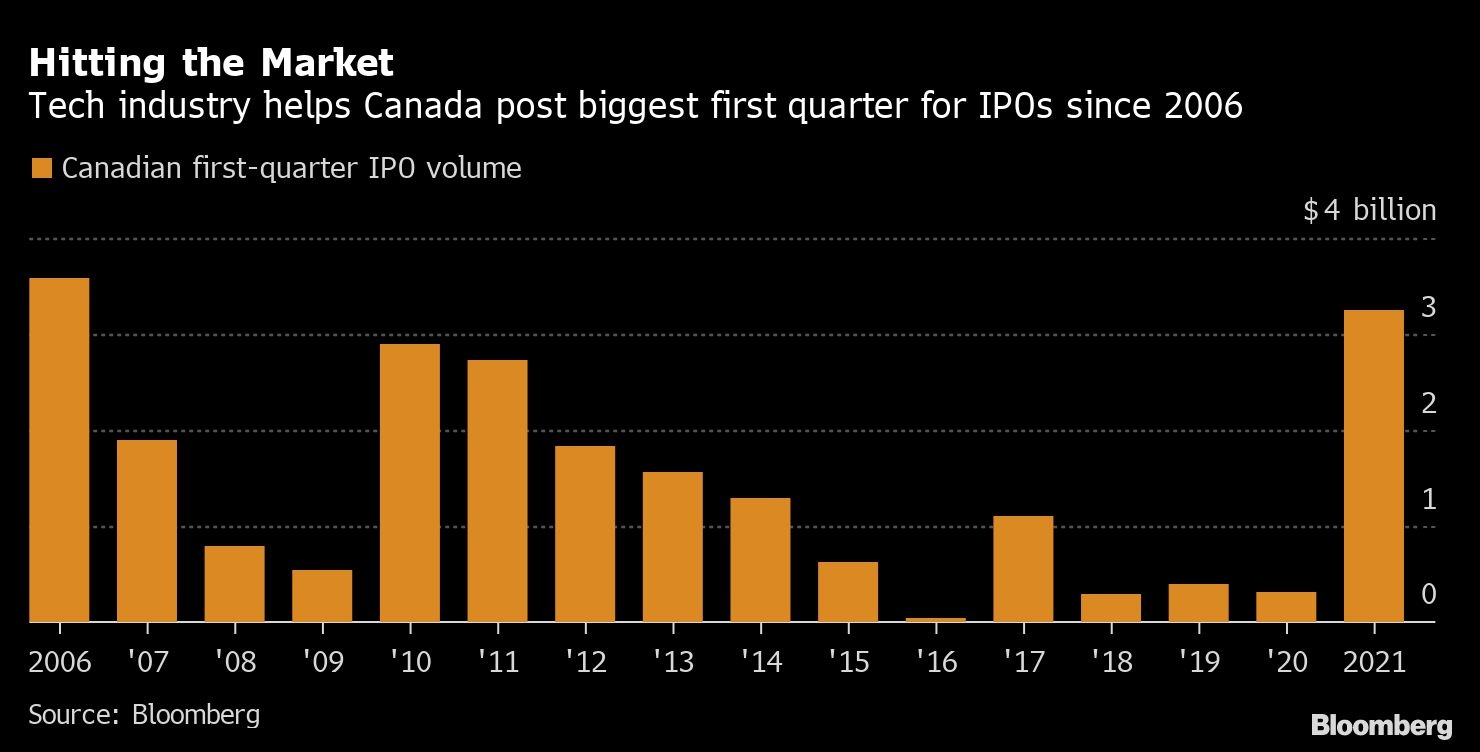 CIBC holds the top spot for Canadian IPO work this year, working on four offerings that generated $414.9 million (US$329.9 million) in league-table credit.

The success of some of those tech companies is feeding into a cycle that encourages more entrepreneurs to start or maintain their businesses in Canada -- and keeps more experienced tech founders in the country as well, Swan said. There’s also more Canadian venture capital becoming available, along with continued early stage funding from the U.S., he said.

“There is a bit more encouragement that you can build a great company in Canada,” Swan said. “So when some companies have success in building their businesses here, and ultimately go public here, it creates enthusiasm and a comfort level for other companies to do the same.”

The year’s hot start for Canada’s IPO market looks poised to continue, Swan said. Bankers across the equity capital markets are working long hours keeping up with a surge of companies from a range of industries seeking to raise money, he said.

“There is a very deep pipeline, not just in technology, but broad-based,” Swan said. “The pipeline is even deeper than what we’ve seen in terms of actual IPO activity.”