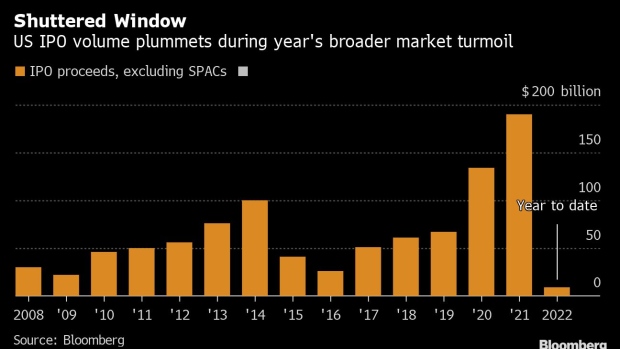 Surging interest rates and repeated market volatility have forced many companies to postpone plans for US IPOs. New issues raised just $2.7 billion in New York in the past three months, the lightest third quarter since 2008, according to data compiled by Bloomberg that excludes special purpose acquisition companies.

This is the third weak quarter in a row and represents a dramatic change from just last year, when historically low interest rates supported record levels of IPO activity. Many of the companies that were planning to go public in 2022 shelved the idea as valuations tumbled in a volatile market, Goldman Sachs strategists including Ryan Hammond wrote in a note on Wednesday. As a result, IPOs have raised $137 billion less than they did at this point in 2021.

“The market for initial public offerings has frozen this year,” they wrote. “The jump in the cost of capital has reduced the valuation of all companies, public and private. But the impact has been particularly severe for fast-growing firms that typically comprise a significant share of annual IPO volume.”

So, companies have sought other ways to raise funds. Private funding rounds by some firms are accompanying a slew of mergers with either large conglomerates or a buyer among an army of deal-hungry SPACs.

Meanwhile, new plans to go public are being announced at their slowest rate in years. Just 64 companies filed for potential IPOs during the third quarter, according to data compiled by Bloomberg, the fewest in any quarter since 2009.

“We’re getting into the kind of market where people are just saying there’s capitulation,” David Ethridge, US IPO services leader at PricewaterhouseCoopers LLP, told Bloomberg this month. “They’re busy people, and maybe they don’t want to fight at the board level about getting the process started when we’re not hearing anything good about IPOs.”

Intel this month scaled back its expectations for Mobileye’s valuation due to the broader market slump and might delay the listing until next year, according to people familiar with the process. Instacart, whose valuation also took a hit this summer, reportedly told investors that it wasn’t planning to issue many new shares in its IPO, which could happen as soon as the fourth quarter. Reddit’s listing also remains in limbo after previously targeting an IPO as soon as the first quarter of this year.

“People really don’t want to come to market when they could have gotten 20% more just a few months ago,” Georgetown University finance professor James Angel said in an interview. “We’re in a bear market and it feels like a recession is on its way. That means it’ll be a bumpy ride for the equity capital markets, and we probably wont see a lot of IPOs in these downdrafts.”

However, some of the smallest of firms in the market have provided an exception to the lull. An unusually frequent number of microcaps have delivered massive and often-fleeting price surges after conducting IPOs that typically raised less than $50 million apiece. This week, electric-vehicle charging firm Atlis Motor Vehicles Inc. traded as much as 918% above its offering price during its first two days as a publicly listed firm.

Nasdaq is increasing its scrutiny of smaller listings after the string of pops that also included a 32,000% rally in AMTD Digital Inc. and spikes in firms such as Forza X1 Inc. and Treasure Global Inc.

Others, however, are less optimistic.

“We’ve had a very mild bear market after many years of rallies,” Angel said. “I remember living through the 1970s. It could get a lot worse.”