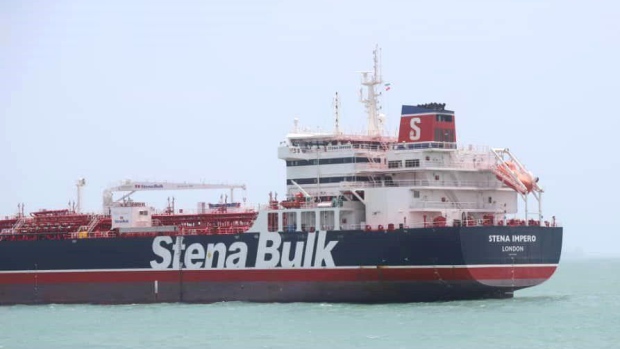 DARLINGTON, ENGLAND - JULY 05: Conservative leadership candidate Foreign Secretary Jeremy Hunt speaks to an audience of party members as he takes part in a Conservative Party leadership hustings event at Darlington Hippodrome on July 05, 2019 in Darlington, England. Boris Johnson and Jeremy Hunt are the final two MPs left in the contest to replace Theresa May as leader of the Conservative Party. The winner will be announced on July 23rd 2019 and will also take up the post of Prime Minister of the UK and Northern Ireland. (Photo by Ian Forsyth/Getty Images) , Photographer: Ian Forsyth/Getty Images Europe

Boris Johnson or Jeremy Hunt will face an international crisis when they take office on Wednesday -- and it’s not Brexit. Iran’s seizure of a British oil tanker in the Strait of Hormuz will present the new leader with a thorny strategic and diplomatic situation.

The U.K. is looking at “a series of options” on how to deal with the situation in Iran, Defense Minister Tobias Ellwood said on Sunday, adding that Britain wants a “professional relationship” with the Middle East nation.

“We’ve seen a ratcheting up of tensions in the Middle East,” Ellwood said in a Sky News interview. “We need to try and de-escalate this.”

Ellwood also said the U.K. is “absolutely committed” to maintaining a military presence in the Persian Gulf and keeping the Strait of Hormuz open. He warned the U.K. needs to invest more in defense, including the Royal Navy. “That’s something the next prime minister will need to recognize,” he said.

Alan West, a member of the House of Lords and former chief of naval staff, warned the next prime minister that there’s a “very real risk” of war in the Middle East and that they cannot ignore the situation in the Persian Gulf.

“Whoever the next prime minister is, he is going to face a major international crisis as soon as he is in post,” West wrote in The Observer. “It cannot be ignored because of Brexit.”

West said the U.K. should make clear to Iran that while up until now Britain has tried to persuade the U.S. to ease sanctions on the middle eastern nation, it will now back stronger sanctions unless Iran releases the British tanker.

Coveney: Ireland Will Engage with Next U.K. Premier (Earlier)

Irish Deputy Prime Minister Simon Coveney said his country will “work closely” with the next prime minister to safeguard common interests. Writing in the Sunday Times, he said Ireland’s one red line is to ensure the peace process in Northern Ireland isn’t put at risk. He warned of the dangers of a no-deal Brexit, which he said would “cause huge damage to us all.”

While Coveney said the withdrawal agreement negotiated by Prime Minister Theresa May isn’t up for negotiation, he extended an olive branch to the new leader by stressing that Ireland’s goal remains a future relationship with the U.K. that renders “unnecessary” the so-called backstop -- the part of the deal that both candidates say needs to be dropped.

Both the Sunday Times and the Sunday Telegraph report that Boris Johnson’s one-time nemesis Michael Gove, who scuppered his bid in 2016 for the party leadership, is set for a promotion if Johnson wins the leadership contest. The Sunday Times says the environment secretary may be put in charge of the communities department, with responsibility for increasing housebuilding. The Telegraph suggests he may be given added responsibilities for climate change while staying in his current role.

To contact the reporter on this story: Alex Morales in London at amorales2@bloomberg.net

To contact the editors responsible for this story: Tim Ross at tross54@bloomberg.net, Sam Unsted, Lars Paulsson