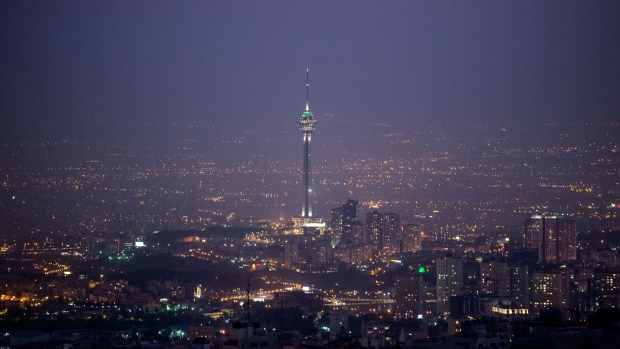 The Milad Tower stands on the illuminated city skyline seen from the Bam-e Tehran in Tehran, Iran, on Friday, Sept. 20. 2019. Iranian Foreign Minister Mohammad Javad Zarif refused to rule out military conflict in the Middle East after the U.S. sent more troops and weapons to Saudi Arabia in response to an attack on oil fields the U.S. has blamed on the Islamic Republic. Photographer: Ali Mohammadi/Bloomberg , Bloomberg

(Bloomberg) -- Iran dodged formal diplomatic censure at the United Nations nuclear watchdog as envoys opted to try coaxing Tehran back to the negotiating table rather than mount pressure over an investigation into decades-old traces of atomic material.

By avoiding an official rebuke, the International Atomic Energy Agency’s board of governors created an opening for the resumption of stalled talks with world powers aiming to restore a 2015 deal that had rolled back Iran’s nuclear advances in exchange for sanctions relief.

Iran’s new hardline government had warned that censure over its lack of cooperation with international nuclear monitors, which could wind up in the UN Security Council, would have imperiled the negotiations.

Diplomats from European countries, Russia and the U.S. all called on Iranian President Ebrahim Raisi to quickly rejoin talks suspended since June. Informal consultations intended to set the date for a seventh round of discussions could unfold at next week’s IAEA annual general conference, which will be attended by Iran’s chief nuclear official, Mohammad Eslami.

“The EU calls on Iran to return to negotiations in Vienna without further delay,” the EU’s representative Stephan Klement said at the meeting. “This is of particular importance given the current dynamic expansion of Iran’s nuclear program while the IAEA’s monitoring and verification activities have been seriously undermined.”

The 2015 agreement was structured to keep Iran a year away from developing a nuclear weapon. But its program is moving so fast that it could soon be able to build a bomb much quicker. Iran has long said it has no intention of doing so.

Still, unresolved suspicion over uranium traces detected at several undeclared facilities some two years ago continue to hang over Iran’s government. Failure to resolve that issue could still lead the country back to the Security Council if the IAEA board resurrects the option to censure Iran at its next meeting in November.

“There has been a serious breakdown in communication with Iran,” U.S. envoy Louis Bono said in a statement. “Iran now, once again, has an opportunity to demonstrate that it intends to finally establish a constructive relationship with the IAEA.”

For its part, Iran told the IAEA this week that its ready for a return to “results oriented” negotiations and that it still wants guarantees that the U.S. won’t abandon a resurrected nuclear deal. Despite Iranian compliance with the 2015 accord, the Trump administration jettisoned it and applied punishing sanctions on the Islamic Republic’s economy in the hope of securing a more punitive renegotiation.

An agreement in Vienna could unleash Iranian oil exports and ease tensions in the Persian Gulf.

Iran has repeatedly rejected the IAEA’s conclusions about uranium contamination, which suggest the presence of undeclared nuclear material sites. The agency’s inspectors have said Iran’s responses haven’t been technically credible.