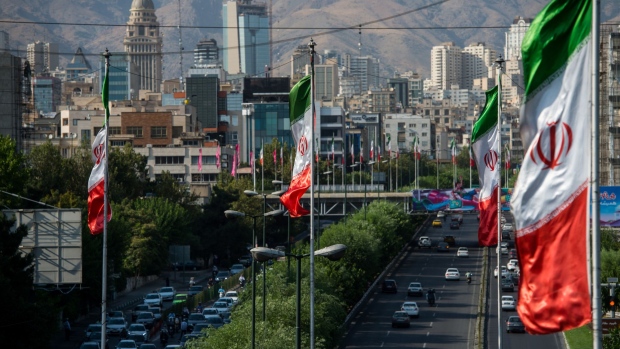 National flags of Iran fly above the Modarres highway in Tehran, Iran, on Saturday, Aug. 4, 2018. Iran’s central bank, acting on the eve of U.S. sanctions, scrapped most currency controls introduced this year in a bid to halt a plunge in the rial that has stirred protests against the government of President Hassan Rouhani. Photographer: Ali Mohammadi/Bloomberg , Bloomberg

(Bloomberg) -- Iranian officials will meet diplomats from China, Russia and the European Union in separate meetings on Sunday, before the main nuclear negotiations to revive the 2015 nuclear deal resume on Nov. 29, Iranian state TV reported.

A plenary meeting of the so-called Joint Commission of the Joint Comprehensive Plan of Action -- the official name of the nuclear deal -- will start tomorrow afternoon at Vienna’s Palais Coburg Hotel, the report added.