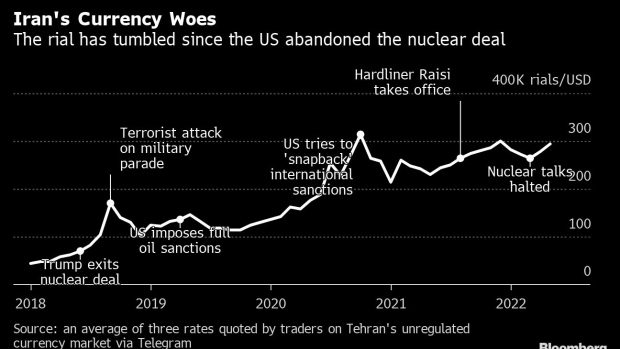 Iran’s government has hiked payments for the poor to help offset a sharp increase in food prices that has stirred unrest.

Prices of staple goods including cooking oil, chicken, pasta and eggs have almost doubled after the government this month stopped providing importers with foreign currency at fixed, heavily discounted rates. The scheme had been blamed for fueling corruption, smuggling and profiteering.

The subsequent surge in prices of basics like bread -- already elevated due to Russia’s war on Ukraine -- triggered protests, especially in restive areas where grievances over discrimination and underinvestment fester, with reports of some fatalities. Iran’s economy is already hindered by US sanctions and talks with world powers over removing some of those penalties in return for new caps on Tehran’s nuclear program are deadlocked.

To counter the growing anger, President Ebrahim Raisi announced a new subsidy plan, boosting cash handouts by up to $14 a month to help the neediest families. The payments hadn’t changed from the original stipend introduced universally in 2010, which was then worth about $36.

Djavad Salehi-Isfahani, professor of economics at Virginia Tech University, said the new policy shows “the government is trying to tackle some of the big fiscal problems in the country,” adding it may go some way to alleviating poverty.

Protests erupted last week in the southwestern province of Khuzestan, which has a mostly ethnic Arab population, where authorities restricted internet access during the unrest, according to the semi-official and pro-reform Jamaran news site.

A lawmaker from the city of Dezful told Iranian Labour News Agency on Sunday that one person died in protests. Videos posted by labor activists on Twitter purported to show at least two other people shot dead by security forces, including in the town of Hafshejan, southwest of Esfahan, as well as protests in the capital, Tehran. None of the footage could be independently verified by Bloomberg.

In November 2019, an unannounced, overnight increase in gasoline prices sparked the deadliest protests in the country since the revolution.

State subsidies have been a defining feature of Iran’s economy since the 1979 revolution when the country’s new clerical rulers vowed to use the Islamic Republic’s oil revenues to support the rural poor and working classes, pouring tens of billions of dollars into discounted fuel and food programs.

Importers of livestock feed and grains had been provided dollars at the subsidized rate of 42,000 rials, which is more than six times cheaper than the current unregulated, open-market rate.

The scheme was introduced by former President Hassan Rouhani’s government when the rial collapsed following the Trump administration’s decision to withdraw from the 2015 nuclear deal and reimpose sanctions, including on critical oil exports.

Unscrupulous, well-connected importers with access to the fixed exchange rate have been accused of using the cheaper hard currency to make huge profits on the unregulated market.