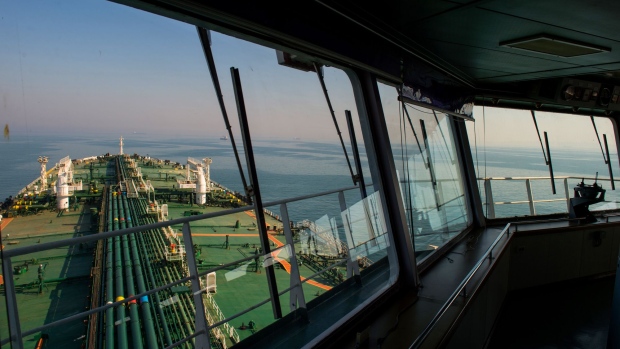 (Bloomberg) -- Here’s something to watch out for when and if U.S. sanctions on Iran are lifted: a tens-of-millions-of-barrels stash of oil floating on tankers, just waiting to go to buyers.

The Persian Gulf country may be holding as much as 69 million barrels at sea, according to estimates from E.A. Gibson Shipbrokers Ltd., a London-based broker that traces is history back to the 19th century. It is hard to be sure exactly how big the floating stockpile really is because it’s unclear exactly how many ships are being used and how full they are, said Richard Matthews, the firm’s head of research.

The speed at which Iran ramps up supplies to the global oil market is of critical importance to crude traders concerned that it’s revival will hinder this year’s 34% rally in prices. In theory, floating barrels could reach most buyers within a few weeks, but Matthews says it will likely take longer for the hoard to clear in practice.

“It will just take a bit of time for all the channels to get sorted out, for the buyers to have confidence to return,” he said. “You’ll see the activity gradually increasing over a period of months.”

Iran has a fleet of 40 tankers storing, according to Gibson’s estimates. Twenty nine are so-called very large crude carriers, where standard cargo sizes are 2 million barrels each. Eleven are Suezmaxes, which hold half as much oil.

Citigroup, which has a similar vessel count, said Iran could have 65 million barrels floating and a further 54 million in on-land storage.

“The timing and the size of a return of Iranian oil to the market is pivotal to projecting the trajectory of global oil inventories and crude oil prices,” Citigroup said in a note on Monday. “The physical oil can be delivered to major export markets, including India and China, within 10-20 days.”

Negotiators for the U.S., Iran and Europe return to Vienna this week for talks aimed at reviving the 2015 nuclear deal, which could loosen restrictions on Iranian oil exports. Under the most optimistic forecasts, the country could return to pre-sanctions production of almost 4 million barrels a day in as little as three months.