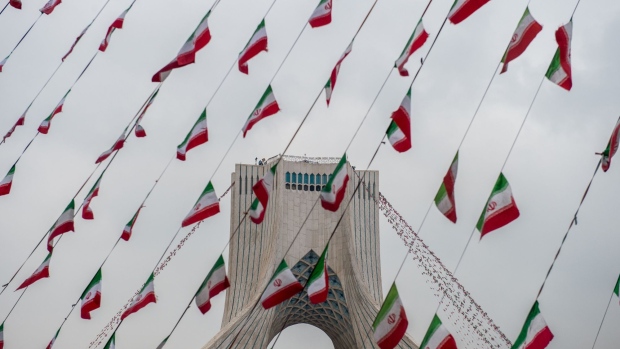 Iranian national flag bunting hangs in front of the Azadi Tower during the celebrations marking 40th anniversary of the Islamic revolution in Tehran, Iran, on Monday, Feb. 11, 2019. As Iran’s Islamic Republic enters a fifth decade, its energy industry has little to celebrate. , Bloomberg

(Bloomberg Law) -- A federal judge ordered Iran to pay $34.8 million to the family of a journalist and outspoken government critic who was tortured and purportedly committed suicide while living under house arrest in Tehran.

Judge John D. Bates of the US District Court for the District of Columbia awarded $17.4 million in compensatory damages and an equal amount in punitive damages to the wife and daughters of Siamak Pourzand, who spent a decade in Iranian prisons and under home arrest despite pleas for fair treatment and release by international human rights agencies. In an extensive opinion released Friday, Bates held Iran liable for hostage taking and torture under the terrorism exception to sovereign immunity in the Foreign Sovereign Immunities Act.

“Plaintiffs are entitled to solatium damages for the emotional distress they endured as a result of Siamak’s detention and torture,” Bates wrote. “Plaintiffs’ mental anguish was a ‘reasonably certain’ consequence of Iran’s actions.”

Herischi & Associates LLC represented the family of Pourzand. Iran didn’t present a defense in the case.

To contact the reporter on this story: Michael J. Bologna in Chicago at mbologna@bloomberglaw.com