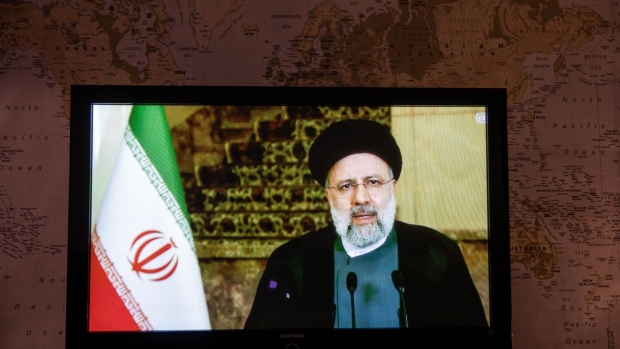 (Bloomberg) -- Diplomats trying to salvage a landmark nuclear deal with Iran remain stuck over key disagreements as the clock runs down, with failure likely to deepen the gloom for the global economy and plunge the Persian Gulf into a new security crisis.

Negotiators wrangled overnight in Vienna over Iran’s demand that International Atomic Energy Agency monitors end their investigation into its past atomic activities. Western diplomats rejected that bid, citing the watchdog’s independence. IAEA Director General Rafael Mariano Grossi may speak to the issue at a press conference on Wednesday.

“Safeguards are a fundamental part of the non-proliferation system and are separate,” U.K. negotiator Stephanie Al-Qaq wrote on Twitter. “We will always reject any attempt to compromise IAEA independence.”

Russia’s invasion of Ukraine has also raised the diplomatic stakes by potentially emboldening Iran to hold fast to its positions. The price of oil has increased to $110 a barrel because of the war and an agreement with Iran, which holds the world’s No. 2 natural gas and No. 4 crude reserves, could temper that spike.

Talks that have entered their 11th month are at a critical juncture, with European and U.S. officials warning only days remain to reach a deal. The IAEA holds a key board meeting on March 7, where Iran could face diplomatic censure over its lack of cooperation with investigators trying to determine the origin of uranium particles detected at several undeclared sites.

Iranian President Ebrahim Raisi spoke with his Russian counterpart Vladimir Putin this week, while Supreme Leader Ali Khamenei in a speech blamed the U.S. for the conflict in Ukraine, calling it a “mafia regime.” Tehran’s hardline government has cultivated its ties with China and Russia and wants to develop longterm strategic alliances with the east.

In addition to the IAEA investigation, sides remain bogged down over Iran’s demand that the U.S. won’t again abandon the 2015 nuclear agreement, which capped Tehran’s activities in exchange for sanctions relief.

The Trump administration unilaterally ditched the accord four years ago and applied economic penalties, prompting Iran to retaliate by enriching uranium close to the levels needed for a bomb.

“If the negotiators fail to bridge the remaining gaps, the best fall back option is a moratorium that averts a perilous cycle of escalation,” said Ali Vaez, who directs Iran research at the International Crisis Group. Iran could offer to freeze its most worrisome activities in exchange for partial sanctions relief, he said.