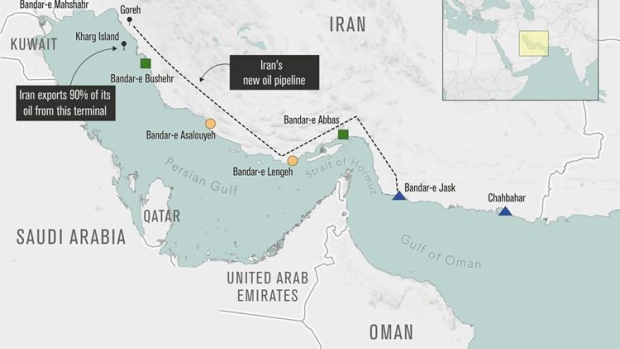 Iran said it will soon export oil from a new port that allows it to bypass the Strait of Hormuz, as nuclear talks between Tehran and other world powers show signs of progress.

National Iranian Oil Co. will start shipping crude from the Jask terminal on the Gulf of Oman coast next month, according to a statement from the state-controlled firm. NIOC is already pumping oil into a 1,000-kilometer (620-mile) pipeline connecting Jask with the southwestern energy hub of Goreh, Managing Director Masoud Karbasian said.

The pipeline will be officially opened by President Hassan Rouhani in the near future, Karbasian said, without giving a timeframe or stating how much oil will initially be exported.

Iran is under strict U.S. sanctions that effectively bar it from selling oil. Yet it has increased exports this year, often disguising the origin of the shipments. Refiners in China are the main buyers. Some flows get passed off as Malaysian and Omani crude after ship-to-ship transfers.

Most of Iran’s energy exports currently have to be sent through Hormuz, a narrow strait and a shipping flashpoint in recent years.

Iran is negotiating in Vienna with nations including the U.S. and Russia about reviving a 2015 accord that restricted Tehran’s atomic activities in return for sanctions relief. Former U.S. President Donald Trump abandoned the agreement in 2018. Since then, Washington has tightened sanctions and Iran has increased its uranium enrichment.

Abbas Araghchi, Iran’s deputy foreign minister and chief negotiator in Vienna, said on Wednesday there had been “good progress.”