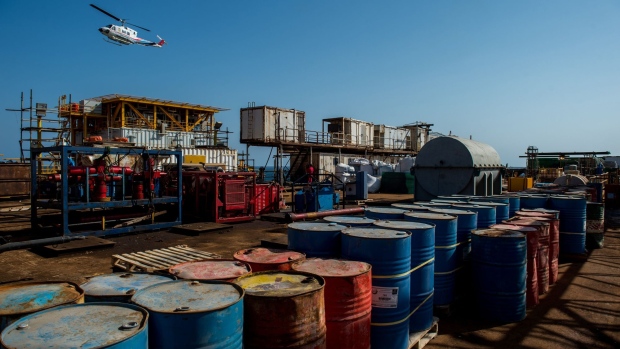 A helicopter flies over oil storage drums aboard an offshore oil platform in the Persian Gulf's Salman Oil Field, operated by the National Iranian Offshore Oil Co., near Lavan island, Iran, on Thursday, Jan. 5. 2017. Nov. 5 is the day when sweeping U.S. sanctions on Iran’s energy and banking sectors go back into effect after Trump’s decision in May to walk away from the six-nation deal with Iran that suspended them. , Bloomberg

Iran is preparing to raise oil exports in a sign the Islamic Republic expects the U.S. to ease some sanctions under a Joe Biden presidency.

Tehran will take measures “to prepare resources and oil-industry equipment for the production and export of oil in line with current capacity within the next three months,” according to President Hassan Rouhani’s official website.

Rouhani said that after a 2015 nuclear deal with the U.S. and European powers, Iran was able to lift overseas sales to 2 million barrels a day. “We’re ready to quickly raise oil production,” he said.

Biden, who is scheduled to be sworn in as president on Jan. 20, has signaled he wants to bring Iran back into the accord that was brokered when he was vice president under Barack Obama.

JPMorgan Chase & Co. said Iran could raise crude exports by as much as 1.2 million barrels a day next year if it strikes a new deal with Washington. A production boost of that magnitude would cause problems for OPEC+, which is trying to keep output down and bolster prices in the face of the coronavirus pandemic. While Iran is an OPEC+ member, the cartel has exempted it from production cuts due to the sanctions and its economic strife.

American sanctions have crippled Iran’s oil industry and caused its exports to drop from 2.6 million barrels a day in 2017 to just 133,000 in November, according to data compiled by Bloomberg. Almost all Iran’s shipments go to China.

U.S. President Donald Trump walked away from the nuclear deal in 2018. Since then Iran’s overall oil production has almost halved to 1.9 million barrels a day.

Iran’s Oil Ministry has not officially commented on or addressed oil production and export figures since Trump announced he was reimposing sanctions.