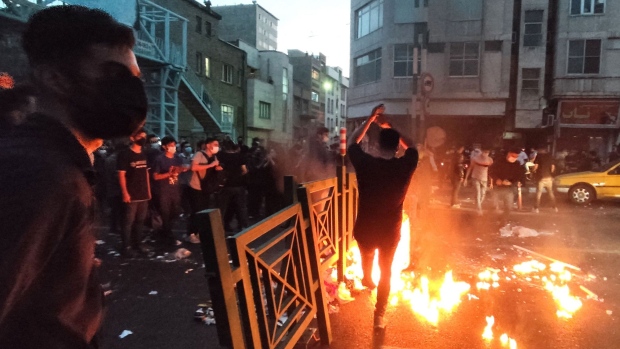 Demonstrators during a protest in Tehran for Mahsa Amini on September 21. Source: AFP/Getty Images , Photographer: -/AFP

(Bloomberg) -- The number of people killed in Iranian protests that were sparked by the death of a woman in police custody rose to 41 including demonstrators and police, state TV reported.

The elite Islamic Revolutionary Guard Corps issued a statement describing the unrest as a “conspiracy” in which protesters had been organized and armed by the “enemy,” usually a reference to the US and Israel. The US imposed new sanctions in response to the government’s actions.

Protests have been reported in scores of towns and cities including the capital Tehran as well as Karaj, Shiraz, Tabriz, Kerman, Kish Island, Yazd, Neyshapur, Esfahan and Mashhad. It’s the most widespread unrest in Iran since November 2019 when authorities shut down the internet and, rights groups say, killed hundreds of people.

The “morality police” units have long been highly unpopular, but the protests are the first major rebuke of their actions. However that doesn’t mean the establishment is about to be swept aside, with security forces retaining a strong grip on the country as they seek to protect the clerical establishment.

Why a Woman’s Death in Iran Has Ignited New Protests: QuickTake

The US Treasury sanctioned the “morality police” on Thursday for what it described as the group’s violence against women and violation of the rights of peaceful protesters.

Footage of the protests posted to social media over the past few days has shown unarmed demonstrators turning on uniformed police and anti-riot officers wielding tasers or handguns as well as members of the plain-clothed Basij, who are also known to carry weapons. None of the videos can be verified by Bloomberg.

The militias, which are under the command of the Islamic Revolutionary Guard Corps, are deployed in order to infiltrate public gatherings and violently disperse protests. They are known to video tape and photograph protesters and passersby in order to later target them for harassment and arrest.

Internet disruptions were widely reported in Iran last night with mobile internet access down in Tehran and slow speeds reported on broadband connections. Internet watchdog Netblocks said on Wednesday that access to Instagram, a hugely popular platform in Iran, has also been restricted.

Iran’s President Ebrahim Raisi is currently attending the United Nations General Assembly in New York where his trip has been overshadowed by the violence at home.