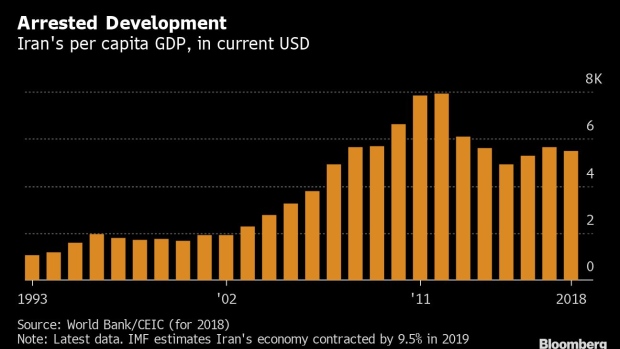 (Bloomberg) -- Last month, a strategist for Iran’s Islamic Revolutionary Guard Corps proposed an alarming tactic to revive the ailing economy: Take an American hostage every week and ransom them back for $1 billion each.“That’s the way to do it,” Hassan Abbasi told a public meeting in Nowshahr, a port city on the Caspian Sea.

Abbasi’s bombast, widely viewed on YouTube, has been disowned by the IRGC’s leadership and isn’t policy. Yet it raises a vital question: What would hard liners do differently if they secured control over all branches of power in Iran? That’s important because it’s probably about to happen for the first time since 2013, when President Hassan Rouhani swept to office promising an end to Iran’s long-running nuclear standoff with the West and a new era of economic prosperity.

So-called “principlists” – conservatives wedded to the theocratic ideals of Iran’s 1979 Islamic Revolution and often connected to the IRGC -- are set to win elections to Iran’s parliament on Friday. And although the legislature has only limited powers, the vote will set the foundations for presidential elections due next year and the eight-year political cycle to follow.The return of conservative control to all branches of government for the first time since the end of Mahmoud Ahmadinejad’s presidency in mid-2013 has significant potential consequences for the Iranian economy and the wider Middle East – including any hopes Iran will renegotiate its landmark nuclear settlement with the U.S.About 90 current MPs have been barred from running again, tipping the field heavily in favor of principlists who have argued that Iran should not yield to the economic privations imposed by tightening U.S. sanctions.

That piles additional pressure on Rouhani and his less ideologically-driven government, which has already lost much credibility in the eyes of voters since the U.S. unilaterally withdrew from the 2015 nuclear deal he championed.

Rouhani signed that agreement expecting the accompanying sanctions relief to trigger foreign investment and plug the nation of 84 million into the global economy after decades of isolation. Never fully realized, those hopes disappeared after the U.S. reimposed sanctions in 2018.

“What is especially important for people is to see this severe pressure lifted from their lives in line with the values of the Islamic revolution,” Alaeddin Boroujerdi, prominent conservative legislator and former head of parliament’s committee on foreign policy and national security, said in a phone interview on Monday. “As the Supreme Leader has said, we are in an imposed economic war.”

Officials from Supreme Leader Ayatollah Ali Khamenei down are urging a shift to “economic resistance” -- an idea floated in the midst of nuclear negotiations as a fall back option should the West abrogate its commitments. That would see Iran abandon Rouhani’s push to open up to Western investment and trade, and focus, instead, on boosting self-reliance. It calls for looser fiscal policies to support the poor, less dependence on oil exports, and more investment in domestic industries.

Conservatives say Iran should turn instead to China, already the nation’s biggest trade partner, though that’s probably not enough to ensure growth. Chinese energy technologies have disappointed Iranian partners in the past and, already embroiled in a trade war with the U.S., China has proved reluctant to invite American penalties by buying much more Iranian oil.

The re-imposition of sanctions has hammered the economy – the International Monetary Fund estimates it shrank by 9.5% last year – but Iran’s growth, inflation and, to an extent, its currency have begun to stabilize, even if recovery remains elusive. Oil exports, down 80%, show no sign of recovering. Yet the construction sector is doing well, as are steel production and exports for cash to Iran’s immediate neighbors – a trade more difficult for the U.S. to interdict than oil.A crisis budget issued in December gives an idea of the emerging approach. Unusually, it received approval from the National Economic Security Council before presentation to parliament, signalling cross-system support. It boosts handouts for the poor as well as defense spending, though in both cases by less than inflation and relying on some heroic growth and oil export assumptions to make the sums add up.Iran appears confident it has sufficient reserves to plug those fiscal holes, at least for a year or so. Critically, that would take the country beyond November elections in the U.S., which might bring a change of attitude in Washington – even if President Donald Trump secures a second term.“The Trump administration has framed its policy as giving Iran a choice: Capitulate to U.S. demands, or see the economy collapse,” said Henry Rome, an Iran specialist at Eurasia Group, a New York-based risk consultancy. “But the Iranians have made it clear they are forging their own third option – to muddle through until circumstances shift in their favor.”

In a recent research note to clients, Tehran business consultancy Ara Enterprise predicted a landslide conservative victory in parliamentary polls, leading to deeper political and economic isolation. Yet they could also surprise.“Many believe that the IRGC in power is not such a bad scenario, as no one could sabotage their mandate,” the note said, whereas reformist President Mohammad Khatami (1997-2005), like Rouhani, faced a conservative assault. IRGC control, it added, could even lead to a Nixon-to-China-style settlement with the U.S., something conservatives would never allow with Rouhani as president.

The IRGC, the only national military force listed by the U.S. as a terrorist organization, has become richer and more powerful than it was even under Ahmadinejad. Across sectors, it has taken contracts that either belonged to or were intended for foreign investors driven away by sanctions. That process is likely to continue.

The risk for conservatives is that some voters will stay home, reducing turnout and, potentially legitimacy. One poll taken after fuel-price protests in November found only 21% of respondents in Tehran planned to vote, though confrontation with the U.S. has energized Khamenei’s conservative base.“It’s not a matter of reformists versus conservatives anymore,” said Mohsen, a 33-year-old who attended last week’s celebration of the revolution. “It’s about revolutionaries against non-revolutionaries, supporters of the Islamic revolution against infiltrators and deviants.”

--With assistance from Golnar Motevalli.

To contact the reporters on this story: Marc Champion in London at mchampion7@bloomberg.net;Arsalan Shahla in Tehran at ashahla@bloomberg.net

To contact the editors responsible for this story: Rosalind Mathieson at rmathieson3@bloomberg.net, Lin Noueihed