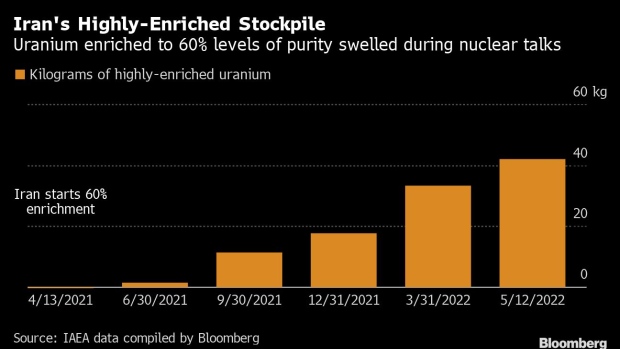 BUSHEHR, IRAN - AUGUST 21: This handout image supplied by the IIPA (Iran International Photo Agency) shows a view of the reactor building at the Russian-built Bushehr nuclear power plant as the first fuel is loaded, on August 21, 2010 in Bushehr, southern Iran. The Russiian built and operated nuclear power station has taken 35 years to build due to a series of sanctions imposed by the United Nations. The move has satisfied International concerns that Iran were intending to produce a nuclear weapon, but the facility's uranium fuel will fall well below the enrichment level needed for weapons-grade uranium. The plant is likely to begin electrictity production in a month. (Photo by IIPA via Getty Images) , Photographer: Handout/Getty Images Europe

Iran’s nuclear program was probed by a record number of international inspections last year, as monitors retained broad access to atomic data and facilities despite the Islamic Republic’s best efforts to rein them in.

The visits are considered by some negotiators as the crown jewel of Iran’s 2015 deal with world powers, underscoring what’s at stake as diplomats struggle to restore that accord amid disputes between Tehran and Washington.

The International Atomic Energy Agency conducted more than one inspection a day last year among Iran’s 21 declared nuclear facilities, the Vienna-based agency said this month in a restricted report seen by Bloomberg. Inspections rose to a record even after Iran’s decision to hold back some data and prevent snap visits from February 2021.

While IAEA Director General Rafael Mariano Gross said his inspectors were “seriously affected by Iran’s decision to stop implementation” of the 2015 agreement as it retaliated against a US withdrawal, they continued verifying uranium inventories. The agency’s investigation of nuclear particles detected at undeclared sites proceeded “without much progress,” he said.

The 2015 deal gave the IAEA unprecedented access to employees in Iran’s nuclear program and its facilities, with the development of new real-time monitoring technologies at enrichment plants.

Diplomats have continued efforts to revive the accord, which the then-Trump administration left in May 2018. The European Union said Friday talks this week with Iran on attempts to revive the agreement went better than expected. But other officials warn that a return looks increasingly difficult, especially as Tehran demands its elite military force is removed from a U.S. list of terrorism sponsors.

Since Iran curtailed the sweeping access granted under the 2015 deal, known as the Joint Comprehensive Plan of Action, the IAEA’s negotiated a series of side agreements to retain agency video-footage inside places where inspectors are no longer welcomed. “The agency stands ready to tackle the intense verification challenges should the JCPOA be restored,” Grossi said.

One of the IAEA’s biggest challenges in 2021 was formulating a new safeguards approach to account for Iran’s stockpile of highly-enriched uranium. Iran began enriching uranium to 60% levels shortly after talks to resurrect the JCPOA began in April 2021. Inventories of the material -- which Grossi calls indistinguishable from bomb-grade uranium -- has swelled since then.

Inspectors continue to gain access to Iran under the IAEA’s so-called Comprehensive Safeguards Agreement, which is the standard set of rules adopted by most countries as part of their commitments under the nuclear Non-Proliferation Treaty. Iran could restrict monitoring even further by leaving the NPT, as it has repeatedly threatened to do if it’s referred back to the United Nations Security Council over infringements of the 2015 deal.

With talks between Iran and world powers stuck, diplomats say extending the state of limbo may be their best hope to avoid even more restrictions on IAEA monitors. For now, the multilateral accord won’t be declared dead because that could set up a confrontation at the UN that leads to escalation.