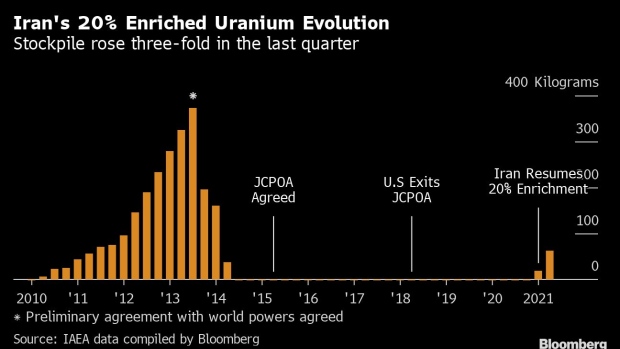 Ebrahim Raisi after casting his vote at a polling station on June 18. , Photographer: Majid Saeedi/Getty Images

(Bloomberg) -- Ebrahim Raisi, an ultraconservative cleric and protege of Iran’s supreme leader, is set to become the country’s president Tuesday as a new security crisis swirls in the vital shipping routes of the Persian Gulf and doubts build over the survival of the troubled 2015 nuclear deal.

Raisi, 60, will begin his tenure after he’s officially confirmed by Ayatollah Ali Khamenei in a televised ceremony, ending the eight-year rule of Hassan Rouhani, a more moderate figure who saw his ambition to build ties with the West flounder. He’s expected to present his proposed cabinet on Aug. 5.

The cleric will have to immediately deal with intensifying international pressure over a deadly attack on a vessel transiting the Persian Gulf, which the U.S. and others have blamed on Iran, and signal his intentions for stalled diplomatic efforts to save the landmark atomic accord.

While Raisi has said he intends to continue the negotiations in Vienna to save the deal, his presidency marks the return of a hardline, staunchly anti-Western brand of politics to the executive branch of the Islamic Republic.

The composition of his foreign-policy team, and especially whether it contains officials with first-hand knowledge of the talks, could prove critical in determining progress. Oil markets were following events in the Austrian capital closely as a successful outcome would likely spur a surge in Iranian exports later in the year.

Yet instead of diplomatic agreement, mistrust is deepening following last Thursday’s drone attack on an Israel-linked vessel off the coast of Oman, which Iran denies carrying out. The U.S. and Israel have vowed a response, while the U.K. summoned Iran’s envoy to London and despatched officials to inspect the damaged vessel at anchor off the United Arab Emirates.

Israel, which is Iran’s leading regional foe, opposes a lifting of sanctions on Tehran and the two nations have for months traded allegations of attacks on the other’s shipping. The deaths of a Briton and a Romanian on board the most recently targeted vessel raised the stakes.

The nuclear agreement imposed strict limits on Iran’s nuclear activity in exchange for sanctions relief. It began to fray after then-President Donald Trump unilaterally withdrew the U.S. in 2018 and reimposed economic penalties, including on critical energy exports.

Iran increasingly breached caps on uranium enrichment and has now purified the material to near the level required for a nuclear weapon. Tehran says its atomic program is only intended for peaceful purposes, but concerns in the West that it could acquire the ability to build a bomb helped advance the 2015 deal.

Lawmakers will vote to approve or reject Raisi’s nominees for office next week.

It’s unclear whether he will retain some members of Rouhani’s nuclear negotiating team in order to keep some continuity or if he intends to bring in officials who worked under Mahmoud Ahmadinejad, the last religious hardliner to helm the government in Iran.

Raisi, who won office in an election marred by low turnout as the frustrated middle class who had backed Rouhani stayed home, will also inherit a crisis in the country’s oil-rich southwest. Khuzestan province has been rocked by protests over water shortages and an economy battered both by U.S. sanctions and the worst outbreak of the coronavirus in the region.

The disease worsened its grip on Iran last week, as the fast-spreading delta variant drove a fifth, record-breaking wave with new cases averaging above 31,000 a day.