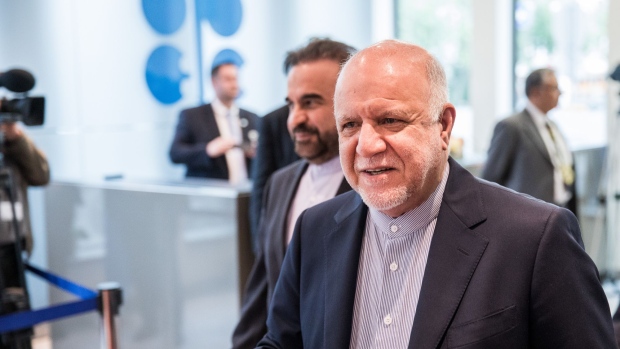 Bijan Namdar Zanganeh, Iran's petroleum minister, arrives for the 172nd Organization of Petroleum Exporting Countries (OPEC) meeting in Vienna, Austria, on Thursday, May 25, 2017. OPEC and its allies were poised to extend their production cuts for another nine months after last year’s agreement failed to clear a global supply glut or deliver a sustainable price recovery. Photographer: Akos Stiller/Bloomberg , Bloomberg

“If they offer me the presidency I won’t accept it, let alone the ministry,” the OPEC veteran told reporters in Tehran, according to state-run Shana news agency. “I will retire, I won’t take another official post. But politics is life, you can’t separate yourself from it entirely.”

Zanganeh’s current stint as oil minister began in 2013 when Rouhani came to office. He oversaw Iran’s push to rebuild its energy sector and attract foreign investment after a 2015 nuclear deal with world powers, which lifted U.S. sanctions on the economy and crude sales.

Those efforts came to an abrupt end in 2018 when former U.S. President Donald Trump withdrew from the landmark accord and reimposed tougher penalties on Tehran. Washington effectively banned all purchases of Iranian crude and forced foreign companies to abandon oil and gas projects in the country.

Iran holds presidential elections in June and Rouhani will step down around two months later after serving two terms. The polls come as the Islamic Republic holds talks in Vienna aimed at reviving the nuclear deal and easing U.S. sanctions, which have battered the economy. State-controlled National Iranian Oil Co. has been priming crude fields -- and customer relationships -- so it can increase exports if an accord is clinched, officials said.

The Organization of Petroleum Exporting Countries and its allies -- a 23-nation grouping known as OPEC+ -- have been curbing supplies since last May after the coronavirus pandemic hit demand for oil. Iran was exempt from the cuts because of the sanctions.

Zanganeh, who also headed the oil ministry from 1997 until 2005 under reformist President Mohammad Khatami, forged a reputation as a technocrat. He was still frequently targeted by Iran’s hard-lined politicians, many of whom opposed the nuclear deal and sought to remove him from office.