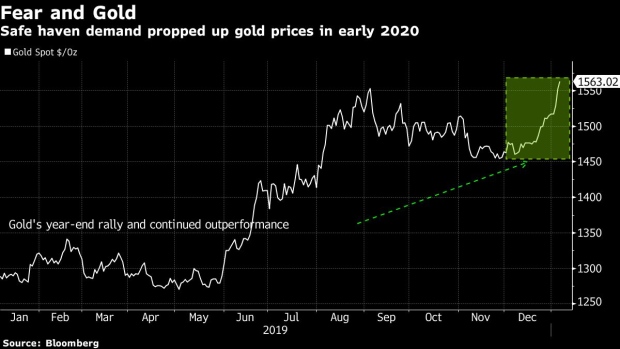 (Bloomberg) -- The shock from the slaying of a top Iranian general by the U.S. briefly threw the S&P 500 into a two-day slump that now shows signs of ebbing as Wall Street starts looking for winners.

Here’s what analysts are saying about the defense, materials and energy sectors:

U.S. defense companies are expected to see their stocks rise as investors flock to them as safe havens amid growing geopolitical uncertainty.

Capital Alpha analyst Byron Callan said the “knee jerk reactions” to the latest escalation may result in improved sentiment for defense stocks amid expectations that a conflict would see wide-spread use of conventional precision guided weapons and surface-to-air missile interceptors.

“Aerojet Rocketdyne, Lockheed Martin, and Raytheon may have larger exposure to these weapons segments than other defense peers,” the analyst wrote.

Meanwhile, Jefferies also expects Raytheon will be among the biggest beneficiaries, as the company has a broad international portfolio that accounts for 30% of revenue. Lockheed also has a 30% exposure, analyst Sheila Kahyaoglu noted, adding that General Dynamics would be the most targeted provider should there be a ground war, given its combat systems products.

“The focus of U.S. sales seems to shift with the threat environment,” Kahyaoglu said, adding that there is now a renewed focus on munitions, as stockpiles have been depleted from conflicts in Syria and Iraq.

Gold prices and equities had a blockbuster year in 2019, owing to loose global monetary policy, a buying spree from central banks, the U.S.-China trade dispute, M&A and other geopolitical unrest. Bullion rallied 19% in 2019 and U.S.-Iran tension has added fuel to this as the spot price has already climbed more than 3% in 2020, rising to the highest level since April 2013.

The precious metal is considered by market participants as a safe haven asset due to its ability to hold its value during uncertain times, providing a hedge against risk in stock markets.

“We found that gold performed well, even controlling for real rates and dollar weakness, during the beginning of both Gulf wars and during the events of September 11, 2001,” Goldman Sachs analysts led by Jeffrey Currie wrote. The bank is bullish on gold prices, and thinks that if the situation worsens, prices could rise above $1,600 per ounce.

The volatile nature of both gold and silver prices have provided boosts to companies with higher beta versus peers. For example, high beta Eldorado Gold Corp. has risen about 161% in 2019, while relatively low beta giant miner Barrick Gold Corp. rose 37% last year. These high beta names could provide very short-term trade ideas, given price volatility. However, for long-term investors, most analysts would recommend sticking with quality stocks.

Credit Suisse analyst Fahad Tariq thinks large-cap gold miners will continue to prioritize free cash flow and shareholder return as gold prices continue to rally. He doesn’t expect the gold miners to return to the previous trend of costly acquisitions and expansion, even as gold prices stay higher. In a bullish gold market, “intermediate producers tend to have the most torque, followed by senior producers, and then royalty companies,” he noted. Agnico Eagle Mines Ltd. and Newmont Corp. remain his top picks.

Energy analysts aren’t urging investors to rush into smid-cap or smaller oil equities, as most seek confirmation that tensions between the two nations will escalate further. The sector rally in late December may also have cut into some of this week’s gains.

The S&P 500 energy index is up more than 1% Monday, with about 90% of its members advancing. In Canada, the main gauge rose just under 1%. Brent oil extended its gains, briefly surpassing $70 a barrel in London for the first time since September.

Read More: Hard as It Is, Frackers Should Ignore Iran.

To contact the editors responsible for this story: Brad Olesen at bolesen3@bloomberg.net, Steven Fromm, Will Daley