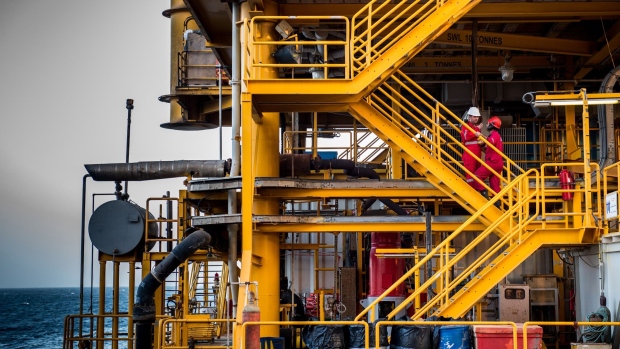 Workers work on a stairway aboard an offshore oil platform in the Persian Gulf's Salman Oil Field, operated by the National Iranian Offshore Oil Co., near Lavan island, Iran, on Thursday, Jan. 5. 2017. Nov. 5 is the day when sweeping U.S. sanctions on Iran’s energy and banking sectors go back into effect after Trump’s decision in May to walk away from the six-nation deal with Iran that suspended them. , Bloomberg

Iran has started ramping up its oil production and expects to reach pre-sanctions levels in one to two months, said Deputy Oil Minister Amir Hossein Zamaninia.

The oil market will be able to accommodate Iran’s maximum oil output of around 3.9 million to 4 million barrels a day, Zamaninia told reporters on the sidelines of an oil conference in Tehran on Friday. He declined to specify the current level of Iran’s oil exports, but said the numbers were “much better than many assume.”

Iran has been subject to tough U.S. sanctions since 2018, when the administration of then-President Donald Trump unilaterally withdrew from an international deal that restricted the Middle Eastern country’s nuclear activities. Its crude production was below 2 million barrels a day for most of 2020, according to data compiled by Bloomberg.

President Joe Biden, who took office this week, is expected to seek the restoration of that accord and officials in Tehran have expressed the hope he will ease restrictions on its petroleum sales. But for now, the sanctions are still in place and any buyer of Iranian crude would face the same legal and financial penalties that have deterred most potential customers over the past few years.

Biden’s Treasury Secretary nominee Janet Yellen said Thursday that the U.S. would only provide sanctions relief if Iran resumed its commitments under the nuclear deal. Tehran, which has been ramping up its nuclear activity in defiance of U.S. pressure, has said it wouldn’t restore its compliance until sanctions are lifted.

Oil Minister Bijan Namdar Zanganeh said in December that the government sought to double oil production and increase exports to 2.3 million barrels a day. Under the U.S. sanctions, Iranian oil exports have dropped to just a few hundred thousand barrels a day, causing significant economic distress for the country.

Zamaninia, who is also Iran’s OPEC governor, said Tehran had been discussing energy projects, including upstream projects and oil purchases, over the past several weeks with European and Asian companies.