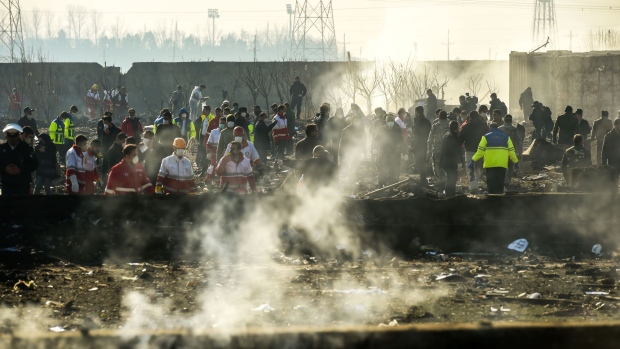 Rescue workers search the smouldering wreckage of a Boeing Co. 737-800 aircraft, operated by Ukraine International Airlines, which crashed shortly after takeoff near Shahedshahr, Iran, on Wednesday, Jan. 8, 2020. The passenger jet, Flight 752, bound for Ukraine crashed shortly after takeoff in Iran, killing everyone on board. Photographer: Ali Mohammadi/Bloomberg , Bloomberg

(Bloomberg) -- Iran and Ukraine will start three days of talks over a downed Ukrainian aircraft in Tehran from Monday, the state-run Islamic Republic News Agency reported.

The sides will discuss compensation terms as well as the technical and legal aspects of Ukraine International Airlines Flight 752 that Iran mistakenly shot down in January, killing all 176 aboard, IRNA reported, citing Mohsen Baharvand, the deputy foreign minister for legal and international affairs.

The previous round of talks was held in Kyiv in July.