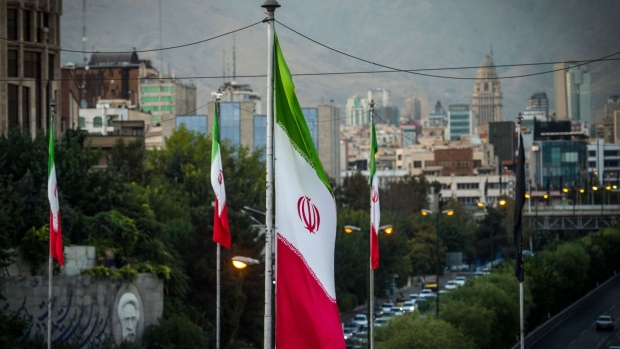 Iranian national flags fly near a major highway through Tehran, Iran, on Tuesday, Sept. 17. 2019. Iranian Foreign Minister Mohammad Javad Zarif refused to rule out military conflict in the Middle East after the U.S. sent more troops and weapons to Saudi Arabia in response to an attack on oil fields the U.S. has blamed on the Islamic Republic. , Photographer: Bloomberg/Bloomberg

Iran welcomed the prospect of talks with Saudi Arabia, a potential olive branch that could see the Middle East’s biggest rivals reduce regional tensions that have roiled oil markets and fueled all-out wars from Syria to Yemen.

The Islamic Republic “has always welcomed dialog with the Saudi kingdom and sees it as beneficial to the people of both countries and regional peace and stability,” Foreign Ministry Spokesman Saeed Khatibzadeh said in a press conference on Monday.

He declined to confirm or deny a Financial Times report from Sunday that said the two countries, which cut diplomatic relations in 2016, held talks in Baghdad on April 9, with another round scheduled for this week. Saudi Arabia has not commented on the report.

Any talks would come in addition to efforts to de-escalate tensions with the west over Iran’s nuclear program. Diplomats from Iran and the U.S. are in Vienna in a bid to revive the 2015 nuclear deal with the European Union, United Kingdom, Russia and China.