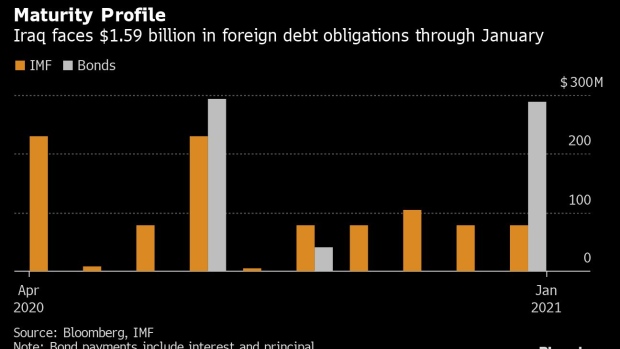 (Bloomberg) -- As Iraq inches toward the formation of a new government, the risks are stacking up for OPEC’s second-biggest crude producer.

Beyond the country’s long-standing sectarian tensions, frayed relations with the Kurdish north, a bloated public wage bill and endemic corruption, new Prime Minister Mustafa Al-Kadhimi now has to grapple with a collapse in oil revenue and the fallout from the Covid-19 pandemic.

Little wonder that the country is seeking financial aid from the U.S. and is said to have asked the International Monetary Fund for a deferral of payments on some $546 million in loans. Its Eurobond yields average 15.7%, easily the highest among Middle Eastern governments, according to Bloomberg Barclays indexes.

All this just as Iraq prepares to meet a $294 million debt payment in July, including a capital installment on 2028 dollar bonds. Those date from a 2006 plan to restructure Saddam Hussein-era securities in the wake of the U.S. invasion in 2003.

Gross domestic product is forecast by the World Bank to contract 9.7% in 2020, after growing 4.4% in 2019. The IMF sees the budget shortfall ballooning to 22% of GDP, wider than anywhere except East Timor, Brunei and Tuvalu.

“Even if it avoids defaulting, there’ll be problems further down the road because the deficit’s going to skyrocket,” said Anna Wilton, an assistant director at Falanx Assynt, a London-based consultancy that provides geopolitical and business risk analysis. “Given the circumstances, it will be able to secure some help from the IMF. If not dollars, then at least an agreement on deferral.”

Investors have been voting with their feet. The yield on the $2.7 billion of government notes due in 2028 has more than doubled to 14.3% since early March. Iraq’s bonds have lost holders 22% this year, the worst performance after El Salvador among countries graded B- by S&P Global Ratings.

Optimists will point to the country’s reserves. Iraq is sitting on a cash pile of about $66 billion, testament to the approximately 4.6 million barrels of crude it pumps each day. But that money stream is drying up following the collapse in crude prices.

“A shrinking revenue pie due to low oil prices will prove to be the most destabilizing factor over the next 12-18 months,” Ayham Kamel, practice head or the Middle East and North Africa at Eurasia Group in London. “Irrespective of who is leading the government, a large drop in revenues combined with rampant corruption is bound to create problems.”

The timing of the payment on the bonds is ironic. The securities issued in 2006 were part of a Paris Club restructuring agreement, with a 80% write-off on principal. On top of an annual coupon of 5.8%, Iraq is set to start repaying 6.25% of the original amount -- or $168.75 million -- every six months, with the first installment on July 15, according to data compiled by Bloomberg.

Iraq’s handling of its liabilities may guide international institutions, governments and private creditors who are coordinating efforts to pause debt payments for poor countries globally.

The Gulf nation may try to benefit from that initiative and seek relief in any form possible, according to Marcus Chenevix, a Middle East analyst at London-based TS Lombard.

“It has a very strong record of successful debt negotiations -- it is a country that historically been very good at playing off its various creditors,” Chenevix said.