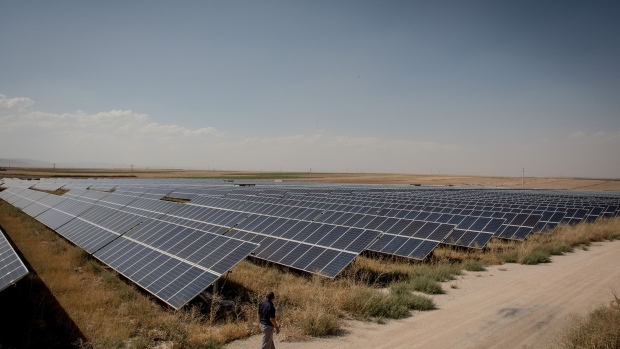 KONYA, TURKEY - SEPTEMBER 13: An employee walks amongst solar panels at the Tekno Ray Solar farm on September 13, 2018 in Konya, Turkey. By 2023 Turkey plans to generate thirty percent of it's electricity from renewable sources in an aim to ease dependence on energy imports from Iran, Russia and Iraq. Due to it's geographical location, Turkey has the second largest solar energy potential in Europe averaging 7.2 sunshine hours per day. (Photo by Chris McGrath/Getty Images) , Photographer: Chris McGrath/Getty Images Europe

Iraq awarded seven projects to generate solar power as part of a plan to produce 10 gigawatts of solar energy by the end of 2030, Iraq Oil Minister Ihsan Abdul Jabbar said in a statement.

The solar power projects are located across the country and will generate a total of 750 megawatts, according to the ministry statement that did not disclose the names of the companies which won the contracts. The biggest plant will be located in Karbala province, with a designed capacity of 300 megawatts. The other plants will be in the provinces of Babel, Muthanna and Wasit, it said.

Iraq, the second-biggest producer in the Organization of Petroleum Exporting Countries, is seeking to generate 20% of its total power production capacity from renewable sources to help ease the pressure on the country’s hydrocarbon-powered electricity plants. Iraqis continue to experience several hours of power outages every day.